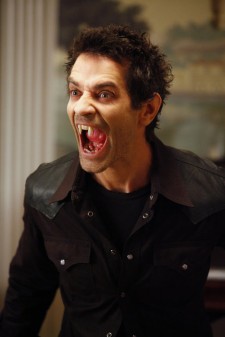 Sunday’s dose of campy, vampy goodness on HBO’s “True Blood” is aptly titled “Trouble.” It certainly applies to the fine messes our heroes are in, but as the pace quickens and the plot thickens, it’s the kind of trouble gay fans can sink our teeth into.

You can find plot spoilers all over the internet. But as gays for gays, we’d rather tease you than spoil you. In our weekly measurement of the Q Factor in each episode, enjoy the reminders if you’ve seen it and prepare yourself with these little teasers if you haven’t.

Alan Ball & Co. continue to deliver in spades on their pre-season promises to make the series hotter and gayer with more than a few of our favorite things.

We love a good bitch, so we love gay consort Talbot in this episode with a little more screen time to flesh it out. With his king busy showing off his increasing evil, it’s on Talbot to play the ever put-upon hostess.

He derides Tara and Franklin upon arrival because their general un-fabulousness clashes with his décor, but like most gay male viewers since the series began, Talbot is much more accommodating when studly vampire sheriff Eric Northman comes knocking.

It’s a blast watching Talbot’s lustful gears turn as he fawns over Eric. After making sure their tour of the mansion is “boys only,” he’s so enrapt that he misses Eric putting two and two together on a past that calls for vengeance.

We also love a good freak. Franklin (top photo) moves from mysterious, probably dangerous stranger to certifiable nutcase in some of the funniest, scariest scenes of the night. We knew his obsession with Tara was a little crazy; now his delusions come to light in full force. 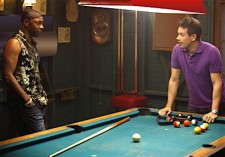 And of course, we love our eye candy. “Trouble” finds ways to distribute this week’s dose of man flesh in a way that’s custom made for gay fans. After a brief appearance early in the season, sexy asylum orderly Jesus finally comes calling for our boy Lafayette. Their flirts and flutters (second photo) may be the best gay courtship ever seen on Prime Time TV. We’ll see if the fun of the flirt leads to the next logical conclusion in a bed somewhere soon.

There’s no “True Blood” hotness like the hot mess of Jason Stackhouse, who has remained conspicuously clothed the last couple of weeks. Well, Stackhouse fans, the body is back in fine form this week to bolster the screen steam of Eric’s tantalizing tight T-shirt and the now-required shirtless scene for werewolf Alcide.

The ensuing slow-motion (or was that just us?) shot of him walking up to the truck plays like a gay fantasy sequence. Like his female target, we’d love to ask coyly, “Where’s your gun? Where’s your shirt?”

This week’s episode is a great boost to the season across the board, but the only thing lacking from also making it the gayest would have been lesbi-rrific Pam. We know; she’s a little busy being held captive right now.

Over on the “even straight people love ‘True Blood’” side of the map, Tara grows a brain, Jessica grows a conscious but not much of a clue, Bill grows a problem, Sam’s trailer-trash family grows their little mystery, and Sookie grows back her psychic zapper.