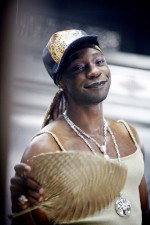 It may be many a gay man’s fantasy to be handcuffed to vampire Eric and every vampire’s fantasy to walk in daylight, but when Russell and Eric live it out, it shows everything in “True Blood” comes at a gory price.

We have hoped that this season’s rapid-fire, scattershot approach to plotlines would have gelled by now, but as we head toward the Sept. 12 finale—yep, no new show on Labor Day Weekend and just one more episode to go—it’s still difficult to tell which scenes are leading to something momentous and which ones are throwaways.

Keeping our eye on the Q Factor of gay content, Jesus may be an instant addict and Lafayette (top photo) is still feeling the residual effects of their vampire-blood trip. La-la sees a flash of his boytoy wearing a demon mask and kindly asks him to leave. He may or may not be sensing something important, but as voodoo objects talk, lights flash and shrines swirl, we wonder if it’s just the drugs.

Elsewhere in Gaytown, Russell (second photo) is still a great villain with some of the funniest/scariest scenes. But after his best moment declaring war on assimilation and death vengeance on Eric two weeks ago, he’s still wandering around with his dead lover’s remains in tow and feeling blue. We’re ready for some action.

Eric takes full advantage of Russell’s mourning and uses Sookie’s newfound Faerie-dom to leverage some time before Russell brings on the whoop-ass. He tells Russell that Faerie blood has the power to let vampires walk during the day, and that he can serve up our Fairie hero on a platter.

But Sookie (bottom photo) escapes captivity at Fangtasia just as quickly as she entered it. During the fight for her escape, lesbi-riffic Pam delivers some great lines and kicks some ass with silver-dust spray in Bill’s eyes before ultimately losing the battle to keep Sookie locked up. That’s fine; Pam also gets some coquette action from a go-go dancer to ease her pain.

As we already know, Faerie blood only delays the Big Burn. So when Eric and Russell round up Sookie and bring her back to the bar with Bill, Eric’s trap is set. Willing to sacrifice himself, they both drink from Sookie, and Eric lures the big gay meany out into the daylight. Handcuffed together, flesh sizzles and screams of pain ensue. Are they both about to die?

If that’s the case, it’s not much of a comeuppance for Russell as such a worthy foe, and not a very dramatic exit for series favorite Eric. And what, no mammoth vengeance for Russell on the Vampire Authority? We’re sure writers are up to something better.

We learn some late-season developments about the rest of the townies, but they’re thrown in so randomly, it’s hard to see—or to care—where things might be headed.

Jason discovers the rival for his football passing record is juiced on vampire blood and that he loves Crystal even if she’s a “were-panther.” Sam reveals a dark side to his staff and patrons in a drunken fit, then reveals his ass to the camera when he beds Tara. Hoyt and Jessica consummate their love, and Hoyt’s mother consummates her plan to tear them apart. Arlene is against abortion but attempts a supernatural one anyway.