‘True Blood’: Thrill me, kiss me, kill me 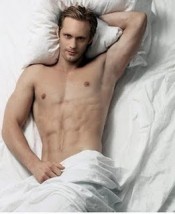 After last week’s gore-over-gay episode, gay fans can delight in the latest episode of “True Blood.” Beyond the usual flirts, one-liners, eye-candy and quick cutaways that we’re used to, the same-sex sparks really fly--at least for the men. It's a banner episode of thrills and kills for any fan of the show. In the gayest season of any mainstream Primetime show ever—even “Glee” isn’t this specifically homo—this week's "Hitting the Ground" does so running, making it easier than ever to measure the Q Factor of gay content. With the best “old married couple” exchanges of the season between reigning kings of mean Russell and Talbot, and studly Eric’s seductive deceit of them coming to a sexual climax, the only thing left for gay guys would be for Lafayette and Jesus to reignite their passion. They do. Everyone knows that the Mississippi vampire mansion of King Russell is Talbot territory. The busy house husband runs the place like any good entitled society wife would.

Hands on hips, Talbot starts the episode at his bratty, bitchy best. But hey, we might complain too. It’s hard to keep things in order when your oft-absent husband moves in his new trophy wife, you can’t get brains out of the sheets, and the stables are flooded with bloody goo. Russell and Talbot (middle photo) are easy prey for Eric (top photo) using his considerable masculine wiles to settle a 1,000-year-old debt. To every gay male fan’s thrill, he seizes his opportunity for revenge by seizing Talbot for sex. Color us agog. “I haven’t done this in a while,” Eric says as he disrobes. “A man?” “No, a vampire.” Cue makeout session. Soon, cut to both men naked on the floor. Eric tells Talbot to flip over, and Talbot coos “Yes, Daddy.” It was hot. What follows is not your usual climax, but we won’t spoil the plot.

Speaking of makeout sessions, Lafayette (bottom photo) and Jesus can’t help themselves. Disenchanted by Lafayette’s drug-dealing, Jesus put their affair on ice. Leave it to Alfre Woodard as Lafayette’s insane mom to heat things up again. She escapes the asylum, the boys deal with her, and Lafayette takes a stab at explaining his plight with the drug kingpens. Lustful glances and soul sharing do the trick. By comparison, lesbian fans get crumbs, but at least there's representation. Vampire Queen Sophie’s human Hadley slinks out of their new boudoir in suggestive lingerie, and sexy Sookie finds plenty of bare-midriff, ass-kicking screen time and even flashes some T&A. Tara fans also get an eyeful in a masturbatory shower scene that in the end, foretells the return of Freaky Franklin. And that’s an issue. Like we’ve said, feminists will find no joy on “True Blood.” Sookie and Tara both suffer unforgivably at the hands of men, and their momentary episodes of empowerment often lead to whiny fits and end by falling right back into the arms of their torturers. Hadley’s quick exit from Sophie’s bedroom was just a tease, and her getup was more Frederick’s of Hollywood than bra-burning babe. Over on the hetero side of the show—not that there’s anything wrong with that—everybody’s busy. All the vampires are busy crying blood, Alcide is busy with family issues, Arlene is busy fretting over her baby daddy, Jason and Crystal are busy consummating their beautiful-but-stupid match, Sam is busy with little brother Tommy, Bill is busy mending things with Jessica, and we’re busy sorting the hillbillies from the trailer trash. ”True Blood” airs Sundays on HBO (Comcast 301, HD701 and HD880) at 9 p.m. It re-airs through the week and becomes available On Demand each Monday night.