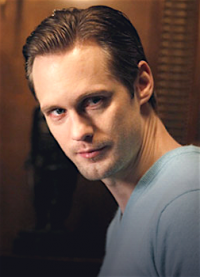 If some audiences—not ours, of course—are squeamish about how gay “True Blood” is this season, the creators prioritize gore over gay this week so that everybody leaves feeling a little queasy. Producers promised us a big gay season, and they deliver maybe more than ever this week. But before we can talk about the Q Factor, even our jaded sensibilities are left with blood and guts as the most lasting impression of the night. Lest we forget what life in the company of vampires is all about and get comfortable with the show’s campy vampies, hot actors and unapologetic inclusiveness, Sunday’s “I Got a Right to Sing the Blues” episode gives us the right to turn away, gasp and even cover our eyes for a second or two. We weren’t able to do so fast enough to avoid a permanent brain imprint of a close up on tearing flesh and bulging eyes in the bedroom with Tara and Freaky Franklin. In a welcome departure from whining, Tara brings a “girl’s gotta do whatta girl’s gotta do” mentality to the top of the episode’s gore-over-gay list. She sinks her teeth into her captor, but ultimately those images are nothing when it comes time for Tara to wield a medieval mace in her final escape. By comparison, Bill’s slow knife torture at the hands of a blood-covered Lorena and a subsequent blood-letting are almost a relief. Speaking of which, we’re more relieved than ever to get to the gay stuff. And it’s good, kids. First the bad news. If the ladies were hoping the episode teaser “Jessica starts practicing what Pam’s been preaching” meant some Sapphic action, no luck. This week, lesbians pretty much have to celebrate the empowered Sookie and Tara along with the season’s overall gay inclusion. Pam doesn’t even appear in the episode, though plot movements suggest her capture will be addressed next week and put her back in action.

On the up side, we are loving the addition of evil Mississippi King Russell and his fey husband Talbot (middle photo, r-l). Our heroes Sookie and Bill finally arrive at the gay Southern Gothic mansion, which has been the epicenter of the season so far. When Bill is immediately overpowered and flung about the foyer, Talbot and Sookie both scream like girls in unison. Super cute. Soon after, Talbot storms off because, as we’re learning, it’s all about him. Russell has to go talk Talbot down before he can get on with his plan to rule the region. After 700 years together, the “old married couple” one-liners certainly apply. The show handles their sexual orientation with matter-of-fact precision unseen on mainstream TV until now. The creators are so relaxed with the material that we can all laugh when Russell tells regal rival Sophie-Anne, “I’ve known many queens in my time, and you are no queen.” In his quest for vengeance against Russell and Talbot for a centuries-old injustice, Eric confirms what most gay viewers already knew: He is hot and knows how to use it. He commands his masculine wiles just as well as he fills out that V-neck sweater (top photo), first making eyes and flattering Talbot and later teasing Russell with suggestive comments and a well-placed stroke with the back of his hand. 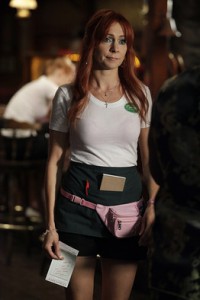 Back in Bon Temps, the gay just keeps on giving. Lafayette and Jesus have two awesome makeout scenes before the redneck neighbors show up for an intended gay bashing. Our boys defend themselves with aplomb, but what Jesus learns in the process puts the kabosh on the whoopee and a rift in their intensifying relationship. Finally, the second gay porn-like scenario in as many weeks is in store for Hot Dumb Jason. Wearing a letterman’s jacket and bending a bare-assed quarterback over the trunk of a car—enough said. And just because they can, this week’s ubiquitous skin scene for werewolf Alcide turns into full nudity—for three seconds. To catch the flash of abs and ass, we suggest that you to go frame-by-frame. Yes, we did the research. Turning off our Queer Eye to look at what else is happening, Sam’s parents Skeezy and Skuzzy reveal their secret, Jason’s little love interest doesn’t reveal hers, and Arlene (bottom photo) is a hoot. ”True Blood” airs Sundays on HBO (Comcast 301, HD701 and HD880) at 9 p.m. It re-airs through the week and becomes available On Demand each Monday night.