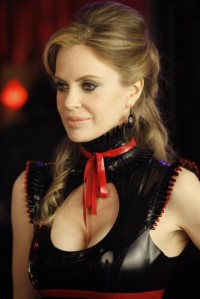 As season premieres go, we’re just happy that “True Blood” is back. The only things that slowed the scatter-shot approach to setting up new storylines were indulgent scenes of pure eye candy.

Or was that just us doing the indulging when prolonged nude scenes and ass shots starring Jason (Ryan Kwanten) and Eric (Alexander Skarsgard) were as bootylicious as gay creator (and former Atlantan) Alan Ball could muster? Not that we minded.

In an almost slow-motion dream sequence, we also see some surprising homoerotica between Vampire Bill and Shapeshifter Sam, who are about to get down when Sam wakes up.

Remember how Sookie dreams of uber-hot vamp sex with Eric now that she has taken his blood? Well, apparently, Bill’s blood works on Sam the same way. We’re hoping those dream sequences continue.

Otherwise, the pace of the Season 3 premiere was so rapid-fire that even as diehard fans, we had a little trouble keeping up. Newbies may want to revert to Seasons 1 and 2 before going any further in the new season.

All the main characters are separated from each other. Sookie’s busy looking for a kidnapped Bill, who is dealing with his werewolf abductors. Sam is off in Arkansas looking for his real parents, and Tara is alternately sad and pissed over Eggs’ death, with her annoying mother offering no help.

Eric is busy juggling fucking the hell out of a new dancer at his club, blowing off Sookie’s pleas, and entertaining Vampire bigwigs who are wising up to his little blood-selling ring. An overzealous Jessica has a dead body on her hands and a jilted Hoyt on her mind, Lafayette swoops in and out with a few one-liners, plus Pam (Kristen Bauer, top photo) turns up the Sapphic vibe on Eric’s sexual conquest and of course, on Sookie.

New characters on the premiere aren’t the big gay money shots promised for the season: Namely, the introductions of Alcide the werewolf, Kevin Alejandro as a sexy love interest for Lafayette, and a badass gay vampire couple. But we were still glad to see the addition of cutie Marshall Allman (second photo with Sam Tremmell) as Sam’s brother and Grant Bowler (Connor on “Ugly Betty”), as well as the return of the brilliant Zeljiko Ivanek (“Damages,” et al) as the Vampire Magister.

It’s a lot to take in. In a season preview, Nelsan Ellis (Lafayette) says that all the plots and subplots “come together beautifully.” Evan Rachel Wood (Vampire Queen of Louisiana Sophie-Anne) says Ball’s vision is “brilliant.” With the show’s track record, we can only believe them and keep watching.

Of course, there was still time for humor and cool vampire action shots. Sophie Anne swoops down on Eric in an intimidation maneuver, Eric pummels his sex partner in fast-motion weirdness, and in one of the best lines of the night, Sookie tells Pam, sweet as pie, “I don’t have time for your lesbian weirdness right now.”

Coming in as a close second for one-liners, “Conscience off; dick on” is Jason’s new mantra for hiding his guilt for killing Eggs.

Confused? Yeah us too. But we love it.