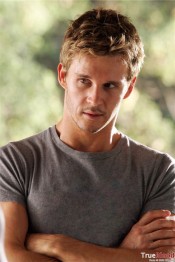 In a transitional episode of “True Blood,” the season’s prominent gay angles stay pretty much on the down low this week as some adversaries go bye-bye and key plots reveal hints of what’s to come.

In the opening minutes, it’s time to say so long to one long-time villain that we love to hate. No spoilers, but let’s just say that a fountain of blood and goo floods the scene when a villainous vamp meets “The True Death.” It’s a warning that the gore has just begun. So has the killing off of mean old nuisances.

Couldn’t have said it better ourselves. In a later scene, he sheds a tear over Sookie to remind us that actor Ryan Kwanten (top photo) isn’t just hot. He earns his props for making Jason so believable. It’s not easy being stupid—or playing Southern backwoods so convincingly when you’re Australian. Speaking of Southern accents, an actor we know as a native New Zealander on other shows has been proving his chops playing a dangerous hick on this sexy werewolf season of “True Blood.” It was fun while it lasted, but his character is the next to get what’s coming to him in this episode.

As we say, the show’s big gay Q Factor is low. With King Russell off taking steps to rule the region, kept house husband Talbot isn’t to be found this week. Lafayette is looking more androgynous than ever, but his hot new love interest Jesus isn’t even mentioned. And in the gratuitous male nudity department, both Alcide and Eric remain clothed.

Thankfully, when it’s time to say goodbye to another well-respected character actor in a short-lived “True Blood” role, it’s also time to welcome back lesbi-riffic Pam (middle photo). We’ve missed the surly vixen and her one-liners, and Pam doesn’t disappoint.

Still held captive, she proves immediately that torture hasn’t stolen her edge. Who else could taunt their tormentor even as their eyelids are about to be pierced shut? Only our girl Pam.

Cue the episode’s second blood-and-goo explosion and throw in a beheading in the scene where Pam is finally released after three weeks of wondering her fate. And cue vampire wedding bells for evil King Russell and shotgun bride Queen Sophie Anne. Yeah, they’re both pretty damn gay, and Sophie’s love for her human Hadley gets a spotlight, but sacrifices must be made when uniting kingdoms.

Russell reveals even more just how evil he is in his maniacal quest for power with a few perfectly executed crazy faces, hand gestures and quick bursts of rage. As the show rids itself of old villains, he more than takes their places. We’re glad all the gay characters aren’t “good,” and Russell may be as bad as they come. We think Eric’s slowly emerging plot for revenge against him will be sweet.

Even with a low Q Factor, the episode still satisfies with a quick pace and lots of new beginnings and well-deserved endings. One ongoing issue that the episode doesn’t resolve is the nagging question that heroine Sookie is always asked: “What are you?” We still don’t know, but two juicy teasers drop some clues.

Whatever she is, Hadley whispers it to a surprised and intrigued Eric, and there is a fairyland/parallel universe where others like Sookie romp. Unicorn-loving lesbians rejoice; there’s plenty of gossamer breast reveals in that land as well. As the divide between Sookie and Bill grows, we’re sure to find out more. That’s why we love this show; somehow we’re happy to just wait and see.

In other news, Hoyt puts on a shirt, Sam and his little brother may be free from their parents Skeezy and Skuzzy, Tara (bottom photo) remains in ass-kicking mode, and the only reason to keep trailer trash Debbie alive is for redemption via Alcide.