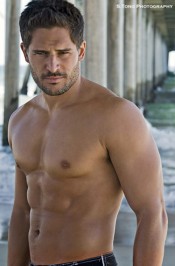 We were just as bummed by the Fourth of July break from “True Blood” as we were excited for Sunday’s return. We just didn’t expect that the juxtaposition of good news and bad news would continue throughout the episode. The good news for gay male viewers came in the opening minute. After blatantly and flagrantly keeping his shirt on in the last episode, Alcide (Joe Manganiello, top photo) was already stripped down and having his wounds tended before the opening credits. With teasers galore, we figured it would be good. It was better. But just as quickly, we were deflated by a rift in the series’ big love affair. Sookie hears from Bill, and the conversation doesn’t go well. Even if you haven’t watched the new episode, you probably knew from preview clips and the tone of the last episode that he was going to try and sever their ties. But by phone? Oh yes he does. In true “True Blood” fashion, our heroine is undeterred in her quest to find Bill and quickly dons a midriff-baring dominatrix getup for the task. Hilarious, but kinda hot. That’s about as good as it gets for lesbian viewers in the show’s Q factor this week, as that pesky good-with-the-bad just keeps on coming. 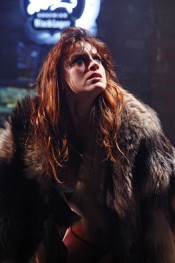 The season’s pace quickens, and events start bringing disparate storylines and separated characters closer together. That’s a good thing. But perhaps titillated by Sookie’s badgirl disguise, feminists might rightfully be angry that, other than Sookie’s resolve, every female character is subjected or even submits to physical and/or mental torture at the hands of a man, even the lesbi-rrific Pam. We’re not ones to expect political correctness or dwell much on social activism when reviewing “True Blood.” In fact, we usually like how the show parodies social mores and injects good camp into bad horror. But it’s hard to ignore that by the time the screen goes black, Eric degrades a stripper, a “procured” lap dancer is sucked dry, Pam is strung up and burned with a hot poker, new vamp Franklin binds Tara to a toilet and then kidnaps her, and Alcide’s ex Debbie (bottom photo) is branded by a pack of werewolves in a scene that stops just short of beastial rape. Sure, "True Blood" makes a habit--hell, an art form--out of shocking gore and violence. And in the theme of good and bad, perhaps our disgust in this episode will make the women’s revenge even sweeter in the end. We’ll stay tuned. The show’s hyperactive use of nudity for both sexes encompasses almost the rest of the queer factor this time around. Previous weeks featured Pam going down on a female employee and a big gay dinner party at the home of centuries-old companions Russell and Talbot. This time, we do get to see more of Sam’s little brother Tommy and werewolf Cooter than we have before, and there was plenty of T&A for the ladies. Good. But scenes featuring gay characters Lafayette being funny and Talbot being a bitch were too short. Bad. In other plot developments without spoilers, the Vampire Magister is onto the vamp blood sales in Bon Temps, Jessica gets a job, Sam strikes a deal with his trashy relatives, Arlene is overworked, and Jason takes the short route to the police force. Like we didn’t see any of that coming. ”True Blood” airs Sundays on HBO (Comcast 301 and HD880) at 9 p.m. It re-airs through the week and becomes available On Demand each Monday night.