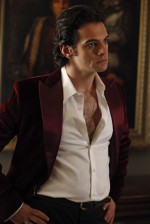 Not much moves the plot forward in this week’s episode of “True Blood,” but creator Alan Ball gets his gay in edgewise with the introduction of Russell and Talbot, the Vampire King of Mississippi and his consort.

Of the other gayness promised this season, we also get a quick flash of Kevin Alejandro’s brand of sexy to come, but barely enough to prime our pumps. It’s just one of many scenes in the episode that’s a set-up without much story.

That’s OK. We watch it for the one-liners that make us giggle and the cool vampire effects and sexy cast that makes us ogle. As usual, “True Blood” delivers.

Back to Vampire King Russell. Turns out, super dandy Russell is the one who sent the werewolves to retrieve Bill last week for a meeting. But before he rides up white-knight style on horseback, we get our “True Blood” nudity dose right up front. As Bill maims or kills each werewolf — bit your ear off; take that, Mike Tyson — they become men again. Naked men. With perfect bodies.

Plenty of werewolf booty shots are rendered less sexy laid amongst eviscerated body parts from the fight. That’s “True Blood” for you, though. And as the only werewolf left alive by the end of the opening sequence, Cooter (Grant Bowler) shows us more rockin’ bod than we ever saw of him as Connor on “Ugly Betty.” Thanks for that.

Russell is none too pleased with the violent way in which the werewolves kidnapped and transported Bill, and we begin to see that not only do they act at his behest, he expects everyone to do the same. It’s good to be the king. 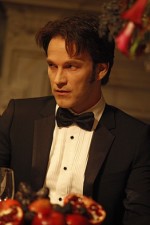 He “invites” (orders) Bill to his mansion for a proposition, and sets him up as a “guest” (captive). That’s when we get a load of Talbot (top photo), Russell’s favored fop—and for all intents and purposes, the lady of the house. Talbot has just redecorated the guest room, which is locked and guarded by studly black-shirted centurions who run around the mansion as staff.

When not on interior decorating duty, Talbot runs the household, including the meal at which Bill (second photo) learns Russell’s plan: In exchange for the job of Vampire Sheriff in one of Russell’s territories, Bill is to get information on Queen of Louisiana Sophie Anne so that Russell can marry her and combine kingdoms.

So gross it’s funny, one of the best running gags of the night is the dinner meeting’s menu. Chilled carbonated blood in place of wine (“Note the citrusy finish; this one ate only tangerines for weeks”), blood bisque (“Prepare the Thai boy!”) and a nice blood gelato. Thanks, but we couldn’t eat another bite.

Bill has his fill, too, when the evil Lorena from last season pops in playing coy. Mad as hell over her past deceits and devilishness, Bill makes sure she doesn’t stay long.

Meanwhile, Sookie does a mean Bill impression, a trick that show fanatics are probably already preparing for parties. 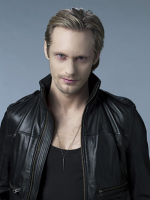 Sookie spends the rest of the episode begging for Eric’s help finding Bill, and through flashbacks, Eric remembers the werewolves and their Vampire ruler from the old days—you know, when they were all Nazis during World War II. The best part of those scenes is that Godric, Eric’s maker, appears. After his death last season, we appreciate any way to bring him back into the plot, if only for a minute or two.

Rounding out the queer factor this episode, Lafayette saves Tara from suicide–telling her mother, “You’ve failed this girl for the last time. Now get the fuck up out my way.” You tell ‘er, Lafayette. Somebody needed to handle the irritating Tara and her mom, and our boy knew just how to make us feel better about it.

Lafayette takes Tara to a mental institution. Instead of leaving her there to get her out of our hair forever, he shows her what she could become: his mother. Alfre Woodard is expectedly pitch-perfect as the crazy mom, and the scene gives us our first shot of Jesus (Alejandro) as her caretaker. Lafayette is noticeably impressed.

Other than Eric’s tank top/blazer combo (bottom photo), that’s the entirety of the gay stuff this week. Jessica gets advice from Pam on dealing with a dead body dilemma, Sam meets his real parents and his jealous shapeshifter little brother (cue quick naked run through the woods), a stranger befriends Tara and threatens Sookie, and Jason is dumb as dirt.

We know. Of course Jason is stupid, but it’s so much less annoying when the writers find a way for him to take his clothes off. They don’t.

”True Blood” airs Sundays on HBO (Comcast 301 and HD880) at 9 p.m. It re-airs through the week and becomes available On Demand each Monday night.