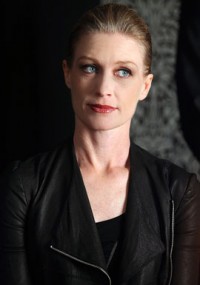 The pace slows this week on our favorite guilty pleasure after “True Blood’s” hyper dose of gay male sexuality last week, but the tempo is just right for plots and dead vampire goo to congeal.

We need to take a breath after the Q Factor of gay content rocketed off the charts in last week’s gayer-than-ever episode, and both gay men and lesbians still get a fair share of bones tossed our way. One gay vampire literally tosses a fresh bone just as a female vamp sinks her teeth into some Sapphic action. But let’s start at the beginning.

Lesbians rejoice. Lesbi-rific Pam is back. The show opens with a shot of her at Fangtasia. She appears just fine, thank you, after her kidnap and torture. But rather than her usual bon mots and sass, we get a kinder, gentler Pam. Maybe she is still recovering from the ordeal after all, or maybe she and Eric are up to their eyeballs in issues with the vampire authorities.

In struts CC from the ‘90s sitcom “The Nanny”… er… we mean vampire PR flack Nan Flanagan (top photo). Paramilitary goons in tow, she’s there to interrogate Eric about what happened to the vampire Magister. In a rare no-scheming mode, Eric tells the whole truth and warns Flanagan that gay meany King Russell intends to upend the vampire plan to assimilate with human society.

Russell is still grieving for his recently deceased consort Talbot. So are we. We were just beginning to really like Talbot’s version of gay vampire bitch. But of course, we don’t want to roll around in Talbot’s death goo, rub it all over our faces, and place as much of it as we can scrape into a Baccarat crystal urn. Russell does.

Over on the human side of the gay cast, Lafayette and Jesus (second photo) finally take their courtship dance to the bedroom. Gay fans might like to see more of Jesus than one tattooed pec—and hope he’ll reveal more just to get rid of that floral silk robe—but it’s nice to see Lafayette kiss the tattoo and finally get some action as well as a chance at a real relationship.

The next morning as they bask in the afterglow over coffee, Lafayette’s mom emerges after playing in her son’s makeup. Nice role reversal, to be sure. She’s ready to go back to the asylum looking fierce, and Jesus escorts her with a promise to see Lafayette again.

After a completely different kind of reconciliatory sex, our heroes Bill and Sookie clean up the mess after last week’s werewolf raid, and it’s time for Bill to visit fairy land. Like Sookie’s visit a couple of weeks back, he finds himself wearing all white and facing head fairy Claudia. She has Sookie’s best interest at heart, and finally tells Bill the secret to what Sookie is—but not us.

The series’ biggest mystery—Sookie’s nature—is held back once again, but it’s coming. Maybe we can stop calling them fairies when we find out. None of us would choose to be called that, now would we?

The show winds down by winding us up. Nan Flanagan renders the ruling on Eric and Pam then jets off to handle final preparations for the VRA (Vampire Rights Amendment). Just enough time for a little dive between the legs of a nearly naked female treat in the back of the limo. Hey, power brokers need release too.

Interrupting Nan’s meal and completely spoiling the mood, King Russell appears on the limo’s TV behind a newscaster, rips out the spine and tosses it aside along with the well-laid plans of the vampire authority. We finally see the full measure of his evil plan to ruin the human-vamp truce and rule the world.

Elsewhere on “True Blood” this week, Sam and his brother act out, Hoyt and Jessica can’t act on their feelings, Crystal’s hillbilly kin act up, and Jason delivers Freaky Franklin’s final act.