‘True Blood’: A fairy by any other name 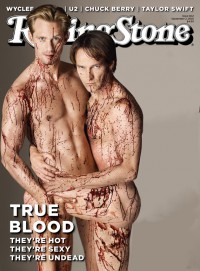 Well, we called it. After unending build-up, Sookie blurts out her nature as well as exactly how we feel about this whole episode in the first line, making the cast's new Rolling Stone cover the most exciting thing about "True Blood" this week. “I’m a fairy? How fucking lame.” Couldn’t have said it better ourselves. Anyone who’s ever been called a fairy, even when they know deep down it's true, feels pretty much the same way. We all know that a fairy by any other name is not the same, but in “True Blood” land, faeries are known by other names. Most of them are unpronouncable. The joke isn’t lost on us that fairies are also called the Fae. Did they say “fey”? To the vampires, the Fae pump the most delicious, intoxicating blood in the universe. We can relate to that. And as much as gay audiences also relate to Sookie being different and misunderstood, there’s something underwhelming about her finally speaking the lame that has dared not speak its name. Even more lame than being a faerie is this plodding installment that doesn’t offer much more than a stop-gap toward the final two episodes of this big gay season. Readers of the books already knew what Sookie was, and the rest of us had it figured out based on the cliche way hints were dropped. That's OK. Perhaps the filler episode is perfectly timed to balance the fervor over September’s "True Blood" Rolling Stone cover that features the Naked Sookie Sandwich with Eric and Bill. It may work to have a slow week of action amid that much word-of-mouth publicity, heightened even more when a creative photoshop user makes it gay (top photo) and goes viral. Sure, the characters of Eric and Bill would never be together, but the image of the show's most noteworthy vampires together is worth the suspension of disbelief. 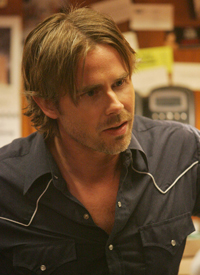 If the goal is to suck the Rolling Stone publicity dry and not back it up, the show’s creators attain it in spades with this episode. Not much happens, and divergent plots are even more disjointed—and just weirder, in a stupid way—than ever. And at the top of the weird list are our gays. In an episode that struggles to connect, Lafayette and Jesus connect on a vamp-blood fueled mind trip where they see visions of their ancestors. Other than a few stolen kisses between the boys, the scenes bring nothing new to any LSD-inspired footage any director has ever imagined—swirling rooms, saturated colors and wavy, wobbly camera tricks. The only thing missing is Jefferson Airplane’s “White Rabbit” playing in the background. And what does this have to do with the show? Not much. That Lafayette is a descendent of a conjurer and Jesus of a sorcerer may play into later plots, but we’d rather see proof of their inner magic in more imaginative ways. Gay meany King Russell, still reeling from the loss of his beloved Talbot, also brings on the strange in scenes that actor Denis O’Hare turns into the most interesting of the night. When he picks up a rentboy ("90210's" Michael Steger) who looks remotely like Talbot, Russell finally gets his goodbyes on his own crazy-ass terms. Elsewhere in “True Blood” this week, Sam (bottom photo) admits to himself that his rage issues aren’t new, Arlene admits her real baby daddy, Jessica and Hoyt admit their true feelings, Jason admits who killed Eggs, Crystal admits she's a panther and "a whole new level of trash," and we admit we could have gone without this episode. We can only assume there is a plan for a thrill kill showdown over the next two weeks. Before the season closes, Eric must confront Russell, Bill must save Sookie (or not, again), and Tara needs to have a complete meltdown. That’s just for starters. Previews tease, “Who will survive the last two episodes?” Even on a slow week, we still can’t wait to find out. ”True Blood” airs Sundays on HBO (Comcast 301, HD701 and HD880) at 9 p.m. It re-airs through the week and becomes available On Demand each Monday night.