A trio of anti-LGBT politicians asks Georgians to promote them 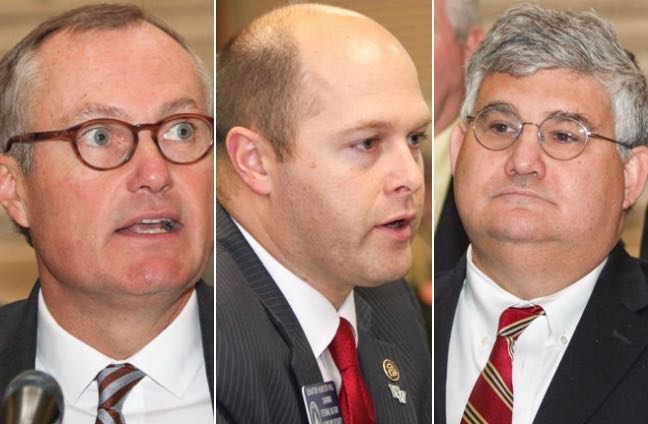 The race among Georgia Republicans for the state's two top elected positions is turning into a crowded collection of anti-LGBT candidates. Welcome to the party, David Shafer and Hunter Hill.

Because why have just one anti-gay candidate when you can have three.

Both men want a bigger soapbox for their conservative visions. Or at least escape state Senate districts that are increasingly leaning Democratic.

Hill said his campaign is about vision. Via AJC:

“I can tell you that obviously a lot of prayer and discussion goes into a decision like this,” he said. “I’m not scared, per se, of any candidate getting in the race because I have a vision and passion and interest of helping Georgia reach its utmost potential. We’re going to give it our heart and soul, and we’re going to try to win every vote.”

But Hill's vision isn't likely to include LGBT people. In March, the state senator from Smyrna voted to amend a bill to include a ban on adoptions by LGBT people. In 2016, Hill killed his own legislation after LGBT protections were added to it and voted for an anti-LGBT “religious freedom” bill that ignited a national controversy.

Shafer said his campaign is about the people. Via AJC:

Shafer said he spent the last five weeks talking with more than 1,200 Georgians and that their “heartwarming” support encouraged him to run.

But Shafer likely didn't mean LGBT people. Earlier this year, he backed an anti-LGBT “religious freedom” bill that Gov. Nathan Deal and legislative leaders made clear they didn't want. In 2016, he opposed federal guidelines concerning the safety and treatment of transgender students and helped create – and then vote for – the same anti-LGBT “religious freedom” legislation Hill backed. He also invited anti-gay Rev. Yoon Young Chung to the state Senate so he could call “homosexuality an abomination.”