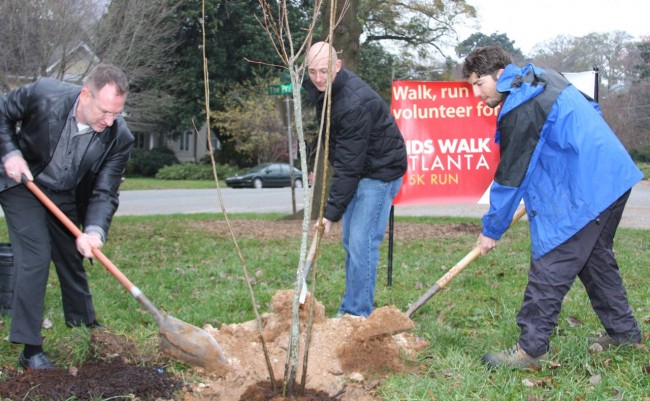 AID Atlanta remembered Phillip Rush and Allen Thornell during a somber ceremony Tuesday by planting three serviceberry trees along the route of the AIDS Walk that honored the two men earlier this year.

A small crowd gathered at a roundabout at the intersection of 17th Street and the Prado in Midtown and took part in the plantings, which AID Atlanta did in conjunction with Trees Atlanta. Robby Astrove, education program coordinator for the conservation nonprofit, and wife Danielle Arellano served as spokespeople for the 19th Annual AIDS Walk Atlanta & 5K Run in October. The annual event was dedicated to Rush and Thornell, who died earlier this year. 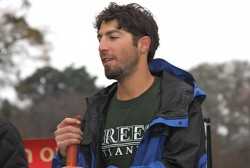 Thornell would have celebrated his 39th birthday Tuesday. His former partner, Chad Prosser, took part in the plantings, as did AID Atlanta officials Jon Santos and Tracy Elliott. Two trees were planted for Rush and Thornell; a third was planted to honor people with HIV.

Rush led the Community Foundation’s Lesbian & Gay Funding Initiative for Youth. As a program officer for the foundation, he assisted a number of organizations that advocate for justice, provide needed services and improve the community. He died April 28.

Thornell was the director of strategic communications at CARE, the international relief agency headquartered in Atlanta. He was past executive director of Georgia Equality and worked with several other LGBT organizations during his 14 years in Atlanta. Thornell campaigned as openly gay and HIV positive during an unsuccessful race for the Georgia General Assembly in 2006. He died Aug. 3.

Rush was remembered during a moment of silence at the 22nd Annual Atlanta HRC Gala Dinner & Silent Auction in May and last month, the combined offices of Georgia Equality, Atlanta Lesbian Health Initiative and MEGA Family Project were renamed the Phillip Rush Center.

Thornell and Rush were also named by the Atlanta Pride Committee as two of eight honorary grand marshals for its Nov. 1 parade.