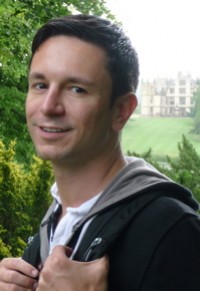 Ramblin’ man and hometown boy Tray Butler (photo) returns to Atlanta–and his gay roots–on Thursday at Outwrite with his new travel guide to the city he just can’t seem to make himself leave behind.

The event takes place at the same corner of Piedmont and 10th where Butler snuck into his first gay bar some 17 years ago.

“I went to Blakes’s when I was 17 years old, and snuck in the back door with my high school boyfriend,” he says via videophone from his current home in London.

“At the time, it was the largest, scariest, craziest place I’d ever seen. It was exhilarating and terrifying all at once – yeah, the terror of being in a gay place, but literally Midtown was terrifying at that point!”

Butler’s world has expanded quite a bit since then. After longtime gigs as a reporter for Creative Loafing and as editor of David Atlanta, he and his partner first moved to New York, where he was editor of HX magazine. The pair returned to their Midtown condo for a while only to accept a two-year stint in the U.K. early this year.

Throughout that time, Butler was also pursuing his career as an illustrator. His cartoons still appear next to “The Blotter” in Creative Loafing. Check out a great overview of his portfolio on his site.

“I love Atlanta, and we do consider it home,” he says. “We will definitely return to live after this London gig is done.”

A long way from that first experience at Blake’s, Butler has seen a lot of change not only for himself, but in Atlanta itself. That’s part of what interested him when the publisher of the Moon Handbooks series of travel books approached him to do “Moon Atlanta.”

“Over the years, I’ve just watched Midtown blossom,” he says. “It’s awesome to see what an incredible crossroads that little corner has grown into.”

For the various “Moon” guides, the publishers hand-pick authors who know their city intimately, but Butler didn’t rely solely on his personal knowledge of Atlanta. It took more than a year for him to do the research, take all of the photos that appear in the book, and even illustrate the maps.

And rather than a touristy book that hits every possible aspect of the city, Butler went for an insider’s view into Atlanta that includes places he would personally recommend, not just the most obvious attractions.

“It’s not exhaustive, but strategic,” the author says. “I’m not going to give you every restaurant, every site. I really try to give places that I would really want to go to. I name some of the other biggies, but in the book, I’ll warn you it’s a tourist trap. I think that sets it apart from others on the market.

And Butler says he was surprised at some of the information he gathered in the process.

“My opinion changed a lot,” he says. “It really made me realize what a young city Atlanta is. By the time the town was incorporated in 1847, New York City had already been around for 223 years, Charleston for 167. Even Milledgeville, which was then the Georgia capitol, was already 44. That put things in perspective for me.”

“It really cuts to the heart of what’s great about Atlanta, and what’s not so great,” he says. “It’s actually kind of a cool thing. Atlanta is not done growing, so there’s still time to get it right.

“Atlanta is like a rebellious teenager, or even as an adolescent that’s going through growing pains,” Butler concludes. “That’s what the city is going through right now–transportation, city planning, the changing demographics, infrastructure problems. It’s all related to crazy growth.”

Sounds like a certain Atlanta boy himself, who knows a little something about coming into his own.

More from Butler, including his best bets for Atlantans and their visitors, can be found on the Moon Travel Guides site, and here’s a clip from his interview on Monday with Fox 5’s morning show: