Three days after returning to a Georgia prison on a parole violation in October 2019, Ashley Diamond was violently awakened at 4:30 a.m. by a man sexually assaulting her, an attack that left her bloodied and injured.

A week later, another man forced himself onto Diamond as her cell was unlocked for lunch.

When Diamond reported the incidents to officials at the Georgia Diagnostic & Classification Prison in Jackson, they responded by mocking her. A few months later, as the assaults and violence continued, a prison nurse groped and harassed Diamond.

Those and more allegations of violent sexual assaults, retaliation from prison officials and the lack of concern for her safety are outlined in a new federal lawsuit against the Georgia Department of Corrections that Diamond and her attorneys filed on Nov. 23. The 105-page document details more than a dozen assaults since she re-entered state prison in October 2019, including allegations that prison staff took part in three of the incidents. The lawsuit also alleges that the state violated her constitutional rights and failed to protect her because she is transgender.

“Being a woman in a men’s prison is a nightmare,” Diamond said in a statement provided by her attorneys at the Southern Poverty Law Center.

“I’ve been stripped of my identity. I never feel safe. Never. I experience sexual harassment on a daily basis, and the fear of sexual assault is always a looming thought. I’m bringing this lawsuit to bring about change on behalf of a community that deserves the inherent dignity to simply exist,” she added.

The violent abuse worsened Diamond’s post-traumatic stress disorder and left her physically and emotionally harmed at a time when she was also suffering from her gender dysphoria going untreated. She attempted to castrate herself to stop the flow of testosterone in her body and later tried to commit suicide, according to the lawsuit.

Diamond faces continued violence, sexual assaults and harassment due to being housed in men’s prisons, according to the lawsuit. After the assaults at GDCP, Diamond was moved to Coastal State Prison near Savannah – another facility for men – where she faced more violence made possible in part, the lawsuit alleged, when prison officials intentionally housed her in a cell with a door that doesn’t lock.

The violence Diamond faces is not new – nor is the response of prison officials. In 2015, she sued the state prison system after she was repeatedly raped, denied medical treatment and otherwise abused. The prison system changed its hormone treatment policy for trans inmates in April 2015, and Diamond was released in September 2015 – two months early. The state settled the lawsuit in 2016 and paid Diamond $250,000. 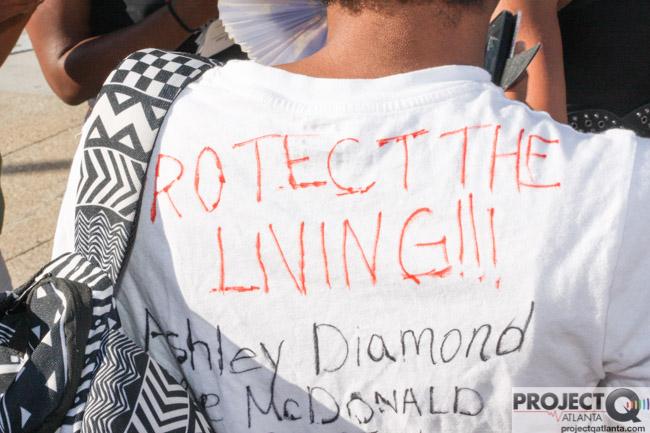 But Diamond’s attorneys said little has changed in how the state prison system treats trans inmates.

“We sued Georgia prisons on Ashley’s behalf before, and unfortunately, we’re having to sue again to end the abhorrent treatment of transgender people, particularly transgender women of color, in Georgia’s prisons,” Beth Littrell, senior attorney for SPLC, said in a press release.

“Five years after changing its policies in response to our first lawsuit, GDC tragically continues to flout its legal obligations to protect transgender people in its custody. The assaults and threats that Ashley continues to face on a daily basis are based on the fact that she is a woman in a men’s prison – it’s intolerable and inexcusable,” Littrell added.

Diamond’s first lawsuit prompted the U.S. Department of Justice in 2016 to launch an investigation into the state prison system over its treatment of LGBT inmates. But that probe stalled when the Trump administration came into office months later.

Diamond, a 42-year-old Black trans woman, was diagnosed with gender dysphoria at 15 and has taken hormones since she was 17.

She began serving an 11-year prison sentence in 2012 after she was convicted on several charges – including burglary, theft by taking and obstruction – stemming from incidents in 2009 and 2011 in Floyd County.

After her release in 2015, she remained on parole without any violations for several years. She returned to prison in October 2019 after what her attorneys described as a technical parole violation.

Diamond was arrested in December 2017 and charged with driving on a suspended license and no brake lights. Prison records show Diamond was convicted of two misdemeanors – escape and obstruction of a law enforcement officer – in Floyd County in August 2019.

In October 2019, Diamond filed a federal lawsuit against Floyd County Jail officials. The lawsuit claimed officials denied her medical treatment, kept her in solitary confinement and physically and sexually abused her. The case was dismissed in December when Diamond didn’t pay the filing fee.

“My hope is that the future is brighter for people like me,” Diamond said. “I hope this lawsuit forever changes the way transgender people in Georgia are treated. This fight is not just my fight, it’s our fight.”

Diamond could remain in prison until February 2024, according to prison records.