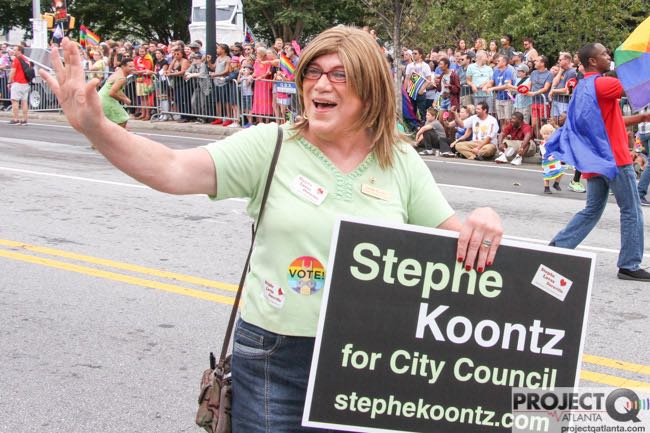 The nondiscrimination policy would prohibit discrimination based on sexual orientation and gender identity in private employment, housing and public accommodations. The city of Atlanta is the only municipality in the state to have such protections.

The Doraville City Council member has been crafting a similar policy for her DeKalb County city with plans to then take that model to other similarly-sized cities in metro Atlanta and convince them to adopt it. Koontz became the first openly transgender elected official in Georgia history after taking office in January alongside gay civic activist Joseph Geierman.

“My goal is to try to come up with a two to three-page ordinance that’s a compact, standalone thing that can be just dropped into a city’s municipal code that doesn’t cause there to be changes to other parts of the code to activate it,” Koontz (top photo) told Project Q Atlanta.

Atlanta’s size made its ordinance too complex, so Koontz looked for one that would fit a town like Doraville, which has less than 8,000 residents. She found it in Roeland Park, Kan., which passed its ordinance in 2014.

Koontz said the ordinance would allow people who claim they’ve been discriminated against to file a complaint with the city. A hearing officer would investigate the merit of the complaint, and from there either the hearing officer or the municipal court will decide if a fine is required.

“We’re still trying to figure out legally which fork in the road it should take. We’re still drafting on it,” she said.

The tentative plan is for there to be a $500 fine for the first offense then escalating fines for repeat offenses, capping off at $2,000 per offense.

“This is not saying that your neighbor can have a discrimination complaint filed against him for yelling something out of his car window. John Q. Public can still be a jerk,” Koontz said. “But what we’re addressing is that if you’re a business owner or any entity that requires a business license or occupational tax permit to operate in the city, that by doing that you are agreeing to follow the city’s ordinances and codes.”

There is also consideration being given to having offenders lose their business licenses in extreme cases.

Koontz is finishing a draft of the ordinance that she plans to present during a Doraville City Council work session in September. She said she’s received positive responses from officials in Clarkston, Stone Mountain, Avondale Estates and Decatur. Koontz said it’s “very possible” Smyrna, Chamblee, Tucker, Brookhaven, Dunwoody and Duluth would approve the ordinance once neighboring cities pass it.

“We’re hoping to pass our resolution in the months to come and hopefully we’ll have a critical mass of cities in metro Atlanta and have a big announcement then,” Clarkston Mayor Ted Terry said.

“We just sort of create this large area where discrimination won’t be tolerated,” he said.

A domino effect across metro Atlanta

Koontz isn’t alone in her fight to get comprehensive protections for LGBTQ people in municipalities across metro Atlanta.

She’s been working with Georgia Equality Executive Director Jeff Graham (second photo) and Cathy Woolard, the former Atlanta mayoral candidate who does consulting work for the group. Woolard was instrumental in Atlanta adopting a nondiscrimination ordinance when she served as City Council president.

Graham said convincing elected officials that it can be done has been a hurdle.

“That has been the first and biggest barrier that we’ve had to date is the mistaken belief by some elected officials — and I would say the information they are getting sometimes from their legal advisors — that they can’t actually pass broad ordinances like this in Georgia with the way the state is structured,” Graham said. “We’ve been trying to break through that noise for years to not have those efforts just shut down immediately.”

Graham credits Koontz for spearheading the push, calling it “her brainchild.”

“One of the things that is so dynamic about her as a person is that she is very active in going to meetings and meeting with other elected officials and working in a regional and even statewide basis,” he said.

Doraville Mayor Donna Pittman said Koontz has spoken with her about the policy, but the mayor did not signal her stance on it.

“I support and commend her for taking the lead in promoting nondiscrimination,” she said. “In Doraville, we value diversity and inclusion for all.”

Graham said Georgia Equality research found municipalities were much more likely to adopt such policies if other jurisdictions near them did the same.

“It becomes a bit of a domino effect. Once you pick up enough municipalities that have acted on it, then other municipalities are going to act on it on their own,” he said.

Graham said Koontz’s efforts would also have an effect on the group’s goal of Georgia lawmakers adopting an LGBTQ-inclusive nondiscrimination policy for the state. An LGBTQ-inclusive public accommodations bill has failed to pass the state legislature in the past.

“It begins to kind of shift the attitude and the culture where we can have a more successful conversation down at the legislature about why the entire state needs to embrace this,” he said.