Trans documentarian puts her own life in lens 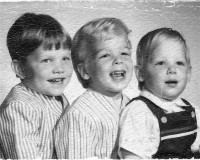 Director Kimberly Reed first envisioned her film “Prodigal Sons” as a documentary dealing with identity issues, but as the camera rolled, the journey veered down paths Reed never dreamt. The film opens in Atlanta Friday.

Reed was born Paul McKerrow, a high school quarterback in Helena, Montana, who was everyone’s golden boy–yet never felt comfortable with himself as a man. Reed grew up with two siblings (top photo): Todd, who is now gay and lives in San Diego and Marc, Reed’s adopted brother who was always jealous of the attention Paul received.

“Prodigal Sons” opens with Kimberly coming back home for a 20th high school reunion—this time as a woman, dating another woman. Marc, who has remained in Montana, is also attending the reunion. Surprisingly, Reed’s classmates are pretty blasé about the news of her transformation—most had known since the death of Reed’s father—but the relationship between Kimberly and Marc is often strained. (Marc and Kimberly together in the film, second photo, with their mother, third photo)

One goal for Reed in making the film was to explore the dynamics of who she was.

“As my identity was changing, I wanted to explore that because I could not figure it out,” she says. “I wanted to resolve that and also look at Marc’s identity.”

Yet making a film loaded with family issues was a catch-22.

“As a filmmaker, you go with it, but sometimes it got too personal,” she admits. “It was a roller coaster with all the twists happening. Sometimes it was fantastic, and other times I wished it was not happening.” 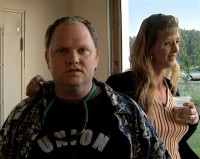 One of the twists that occurred during the making of the movie was having Marc look into his own heritage and discover that he is related to none other than Orson Welles and Rita Hayworth. Another was Marc’s own emotional turbulence.

In a car wreck as a young adult, Marc had part of his brain removed and has never fully recovered. From time to time, he is prone to emotional outbursts, one of which is so severe his family has to call the police. Although the relationship Reed seeks from Marc never quite materializes the way she hopes, she does have a much clearer sense of self at film’s end.

Keeping the family as the central focus was key for Reed.

“It was important for me to make a film about human issues,” she says. “People in the film can be identified as gay or lesbian. I think it’s important to talk about these issues, but also to let them recede.”

Many of the trans-themed films the filmmaker has seen have not been as three-dimensional as she would like.

“Before I made this film, I didn’t see people in the media I could relate to,” she says. “In movies, if there was a trans issue, it was the only issue. There was no oxygen for anything else.” 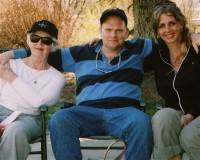 Reed does feel that media coverage of trans issues is slowly getting better.

“A lot of issues that the trans community are dealing with are things that were dealt with by the gay community or community years 10, 20, 30 years ago,” she says. “But we do have the advantage of seeing how the LGBT community did it.”

In February, Reed appeared on ‘The Oprah Winfrey Show” to talk about the film, giving the project more notoriety than she envisioned. She has spent her time since criss-crossing the country to promote the film. Once that is over, she’ll be preparing for the film’s summer DVD release.

She and her girlfriend Claire have been together for 10 years. The relationship was strained during the filming of the movie, including a homophobic rant from Marc during a family gathering. As a filmmaker, Reed says she spent years on the film, sometimes working non-stop to get it completed.

“That tested our relationship, but it made it stronger,” Reed says. “Claire’s support was overwhelming.”

Jim Farmer is an Atlanta-based public relations professional specializing in film promotions. He is in charge of promoting “Prodigal Sons” in Atlanta. He is also the director of Atlanta’s annual Out On Film gay and lesbian film festival, and has been a theater critic for more than a dozen years.