It’s not as splashy as the recent focus on the It Gets Better campaign and gay teens, but Saturday’s Transgender Day of Remembrance will bring attention to another often maligned group under the LGBT umbrella: transgender people. 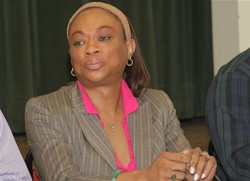 The annual international occasion calls attention to the suicides and murders of transgender people during the past year. In Atlanta, activists will gather at the State Capitol for a candlelight vigil being organized by the Juxtaposed Center for Transformation and its executive director, Tracee McDaniel (photo).

McDaniel, a longtime transgender activist, was appointed to the Atlanta Police Department’s LGBT advisory board earlier this year. In October, Atlanta Pride honored her as one of its 40 Community Builder grand marshals for the parade.

Let’s stand together as a community for a vigil in observance of Transgender Day of Remembrance. Throughout the world, people gather every year to pay respect to those needlessly killed by hate crimes against the transgender community, and to call attention to the threat of violence faced by gender non-conforming people.

Ahead of Saturday’s event, Atlanta transgender activist Monica Helms created a video tribute (video above) to the transgender people who have been killed since the Day of Remembrance in 2009.

Some trans activists are also asking supporters to wear yellow on Saturday to show their support.