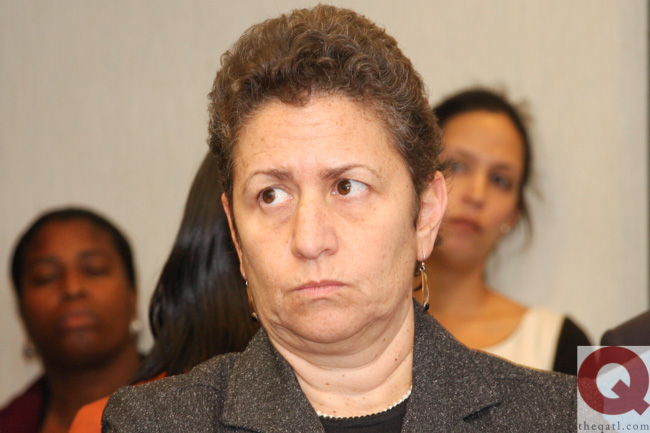 Former senior assistant city attorney Tamara Baines is suing Shahar (top photo) and the city, claiming that she was fired for complaining about Shahar’s alleged actions to the Equal Employment Opportunity Commission.

Baines claimed that Shahar “used her position and the authority of her position to engage in a pattern and practice of subjecting her female co-workers and subordinates, including Ms. Baines, to a hostile work environment and retaliating against them when they rejected her sexual advances,” according to the lawsuit. Baines filed the suit in January in the U.S. District Court for the Northern District of Georgia.

Shahar retired 10 days after the suit was filed, capping a 25-year career with the City of Atlanta that included her being the LGBTQ liaison to former Atlanta Mayor Kasim Reed. During the 1990s, Shahar was at the forefront of LGBTQ equality issues in the city.

Baines said that Shahar subjected her to “repeated unwanted sexual advances, comments and touchings,” according to the lawsuit.

Shahar and the city denied Baines’ allegations. Attorneys for Shahar also filed a motion to dismiss the lawsuit, claiming that the statute of limitations ran out.

Baines began working for the city in 2004. She claimed that in February 2016, Shahar began insisting that Baines meet with her alone, and that’s when the sexual advances started, according to the lawsuit.

Baines claimed that she told Deputy City Attorney Karen Thomas and City Attorney Cathy Hampton about Shahar’s alleged behavior, but that they initiated no formal investigation. Shahar’s behavior continued, according to the lawsuit.

“Ms. Shahar escalated from having her hand on Ms. Baines’ leg to having it further up her thigh,” according to the lawsuit.

Hampton is also embroiled in a federal corruption probe into Atlanta City Hall.

Baines claimed that Assistant City Attorney Maiysha Rashida Rashad and Deputy City Attorney Keisha Burnette also harassed and stalked her starting in 2016. Baines said Rashad touched her inappropriately and stalked her physically and through her social media accounts both in and outside of the office, according to the lawsuit. Baines claimed that Shahar told her that both Rashad and Burnette had hacked into Baines’ private social media accounts.

Baines said after unsuccessfully trying to resolve the issues internally, she contacted Tracy Reed, the brother of then-Mayor Kasim Reed.

“Ms. Baines had known Mr. Reed for a while and texted him about an ‘LGBT issue,” according to the lawsuit.

Baines said Reed responded and offered to set up a meeting to discuss the issue, but he never followed up to schedule it.

Baines said her doctor placed her on medical leave in December 2016 due to depression, anxiety and bipolar disorder. But Baines said that Rashad and Burnette continued harassing her throughout that time, including hacking her social media accounts and “following her around,” according to the lawsuit.

Baines claimed that supervisors continued forcing her to work during her medical leave, but they refused to allow her to return to work after a doctor cleared her to return in February 2017, according to the lawsuit.

Baines filed a complaint with the EEOC in March 2017, “based on the sexual harassment against her and the disability discrimination to which she was subjected under the [Americans with Disabilities Act],” according to the lawsuit.

The city fired her that July.

Baines claimed in the lawsuit that discriminatory and retaliatory conduct is “the unofficial policy and custom of the City of Atlanta.”

“Specifically, the City of Atlanta has a policy or custom of permitting sexual harassment of its employees and disciplining and terminating employees who object to working in a hostile work environment,” according to the lawsuit.

Shahar is a trailblazer in the fight for LGBTQ equality in Georgia. She sued Attorney General Mike Bowers after he rescinded a job offer to her in 1991 because she is a lesbian. The case reached the 11th Circuit Court of Appeals, which sided with Bowers. The Georgia Supreme Court refused to hear the case.

Reed appointed Shahar to be the city’s LGBTQ advisor in 2013.

“I have dedicated my career to defending people’s right to be treated with fairness and dignity,” she said. “Ms. Baines’ claims are the antithesis of my lifework and values, and her allegations against me are untrue.”

Shahar’s attorneys, who also represent the city in this case, filed a response to Baines’ lawsuit on April 8, denying that Shahar engaged in “any of the illegal and amoral actions described in [Baines’] complaint.”

“As a preliminary matter, Ms. Shahar responds that she has never made a sexual advance upon any co-worker or subordinate, including Ms. Baines, or upon any other person, male or female, in the law department or in any other location, with the sole exception of her spouse,” according to the filing.

Shahar’s attorneys filed a motion to dismiss the lawsuit on April 11, citing a statute of limitations issue. Baines needed to make the claims alleged in the suit within two years of her last interaction with Shahar, and Shahar has had no contact with Baines since Dec. 6, 2016, according to the filing. Baines filed the complaint on Jan. 15, more than a month after the statute of limitations ran out.

“I actually think we will prevail on Ms. Shahar’s motion, and the city did not file one because they had no grounds to do so,” she said.

Neither a City of Atlanta spokesperson or the city’s attorneys responded to Project Q’s request for comment on the lawsuit.