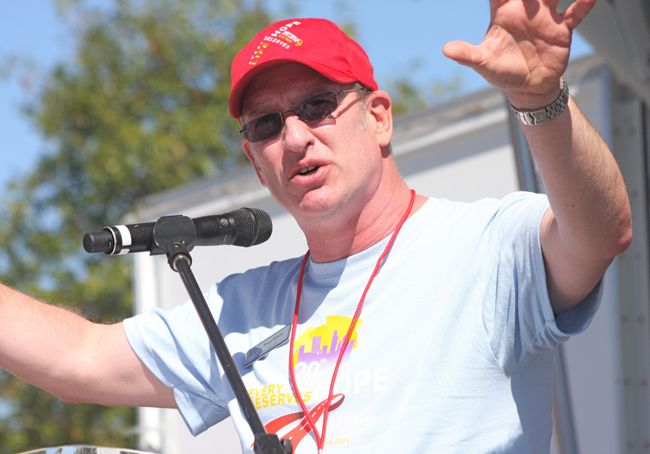 The executive director of AID Atlanta, who has helmed the HIV service organization during a recession and a drop in fundraising from its signature event, resigned on Friday. Tracy Elliott said in an interview on Monday that he’s led AID Atlanta through a five-year strategic plan and now it's time for him to pursue other opportunities and for the non-profit to seek new leadership. Elliott joined AID Atlanta in March 2007 and leaves behind an organization with a staff of 85 full time employees, 15 part-time employees and a $7.6 million annual budget. Elliott is a fixture at LGBT fundraisers not only for AID Atlanta but for other non-profits and gay political candidates. “It is time for some new ideas around here,” Elliott said in an interview with Project Q Atlanta. “I am very proud of the progress we’ve made the last five years. The next phase of AID Atlanta will require someone else’s energy.” On Thursday, he sat with Kevin Fenton, chief of the Centers for Disease Control & Prevention’s HIV efforts, as Fenton praised AID Atlanta for its leadership in combatting HIV. Elliott and AID Atlanta honored Fenton and others during AID Atlanta Honors, which also marked the organization’s 30th anniversary. Elliott said he submitted his resignation to the board on Friday and announced his decision to the staff on Monday. The group issued a brief statement about Elliott’s departure.

The board of directors of AID Atlanta announces the resignation of Executive Director Tracy Elliott. He’s served the organization for five years. His last day is Friday, June 29. Director of Development Jon Santos; Nicole Roebuck, director of client services; and Neena Smith-Bankhead, director of education and volunteer services, who have been with AID Atlanta for 10 years and 12 years and 16 years respectively, will co-lead the organization while the board launches a search for Mr. Elliott’s replacement.

Elliott said several factors played into his decision to step down from AID Atlanta. But he would not elaborate on his reasons other than to say that he’s accomplished putting into the place the organization’s five-year strategic plan. He has no immediate plans for employment. “I am going to take some time for my next plan, where I want to be, what I want to do, do I want to pursue another passion,” Elliott said. Elliott helps oversee the organization’s signature event, AIDS Walk Atlanta & 5K Run, each October. The event attracted thousands of participants and raised $915,000 in 2011 and helped the group inch closer to the $1 million mark that it hasn’t reached in several years. In 2009, AIDS Walk registered more than 8,000 participants but the $850,000 raised fell about $100,000 short of its fundraising goal. Elliott has been named a Fenuxe 50, delivered a poignant speech to open the AIDS Walk (video below), lamented the loss of LGBT leaders in Atlanta and served on the LGBT advisory board for Atlanta police. “I just realized for my personal situation and the organization’s that it is time to start thinking about the next move,” Elliott said.