Tracks to rock your Madonnarama parties 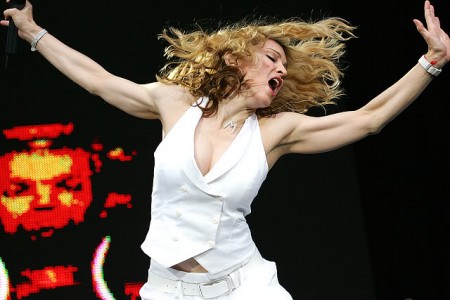 With Madonna’s 51st birthday on Aug. 16, gay Atlanta is preparing to celebrate the Queen of Pop with two upcoming events.

There’s the Madonnarama Party at Jungle tonight and another one Aug. 14 at Mary’s. In honor of Madge and her special day, here are 10 must-have tracks for any Madonna fan.

10. “Like a Virgin” from “Like a Virgin” – 1984
This was M’s first brush with controversy, and she must have liked it since she went on to continually scandalize conservatives and delight her fans. At the time of its release, the lyrics shocked some since she was clearly singing about sex, which seems ludicrous given what’s played on radio today.

9. “Music” from “Music” – 2000
With the words “Hey, Mr. DJ, put a record on/I wanna dance with my baby,” this track kicked off a whirlwind stint on the dance floor with singles from this album. The mix of funk, disco, and dance music in this song became an instant fan-favorite.

8. “Live to Tell” from “True Blue” – 1986
One of the most dramatic moments of the Blonde Ambition Tour was Madonna’s rendition of this song (albeit slightly off key), and it is still one of her most enduring ballads today.

7. “Express Yourself” from “Like a Prayer” – 1989
Part hit single, pop anthem for female empowerment, this track was accompanied by a super-sexy video that featured Madonna in chains. That pissed off feminists who just didn’t get that if Madonna is naked and chained to a bed, it is only because that’s how she wants it.

6. “Crazy for You” from “The Immaculate Collection” – 1990
While some might defer to “Live to Tell,” this ballad has always captured my heart. Originally released on the soundtrack to “Vision Quest” — Madonna’s film debut as, wait for it, a nightclub singer — her live performance during the Re-Invention Tour almost made me faint. 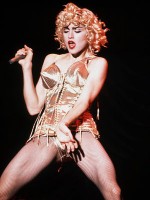 5. “Ray of Light” from “Ray of Light” – 1998
From the opening licks on the electric guitar to the last burbles of electronica, this track grabs you by the balls and jerks your gay ass to the dance floor. Even though we can’t hit the high notes towards the end of the song — and neither can Madonna live, but whatever — we all try to hit them anyway.

4. “Into the Groove” from “You Can Dance” – 1987
By uttering “You can dance/For inspiration,” Madonna lets us know that she is certainly a pop/dance diva and just try standing still while you listen to this track.

3. “Take a Bow” from “Bedtime Stories” – 1994
One of her most successful singles, this song (and sensuous video) reminded everyone that as much fun as her dance singles are, Madonna can still stir the soul with a ballad.

2. “Holiday” from “Madonna” – 1983
A perennial fan-favorite, Madonna used this early hit to close her concerts for years. Sadly, she opted to not include it in domestic legs of her last two tours, but is performing it overseas for the European leg of her multimillion dollar-grossing Sticky and Sweet Tour.

1. “Vogue” from “I’m Breathless: Music from and Inspired by the Film Dick Tracy” – 1990
A friend of mine calls this the gay national anthem and she may be right. With a sleek black-and-white video, crisp choreography, and plenty of attitude and camp, “Vogue” is by far the quintessential Madonna track.

Okay, before you have a hissy because I didn’t include your favorites, this one of the hardest lists I’ve ever had to create. So here are the honorable mentions, in order of release date, which barely scratches the surface in my book: