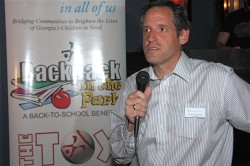 It doesn’t take spending much time in gay Atlanta before you hear about the social event of the holiday season — the Toy Party. The group that puts it on kicked their campaign into gear with an event last week in Midtown.

The wildly popular Toy Party, held in early December, draws thousands of people to a cavernous space to collect toys for needy children, all the while serving as a festive start to the holiday party season. Last year, the event attracted thousands of people and more than 5,000 gifts. Its sister event, Backpack in the Park, helped fill 1,500 backpacks last summer for kids as they readied for a new school year. 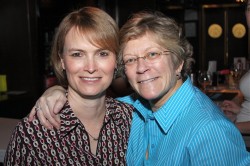 But the events don’t come cheap or easy. So For the Kid in All of Us, the non-profit that hosts both, kicked off its 2010 campaign on Thursday at Bellissima.

The evening served as a thank you to past supporters and a solicitation for new donors. Among mixing, mingling and cocktailing, there was the pitch from Board President Jorge Esteban (top photo): Help support an organization that last year touched the lives of more than 7,900 children in need.