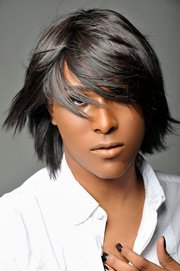 Make believe recording artist and short-distance sprinter Centino Kemp, the “Wildchild” of Megadaddy Bishop Eddie Long, got paid for being bad and now is taking up residence in a new home. Kemp took fans on a video tour of the new digs. It’s a little dirty and a fixer upper. Like Kemp. But he’s a proud homeowner. There’s a look into the bathroom, the closet – no sign of Long in there – the bedroom and even the kitchen complete with a stove filled with leftovers. “My house is kind of dirty. I just purchased this house,” Kemp says during the tour. “Y’all can see it’s a fixer upper.” Kemp is Guy No. 5 among the group of men that accused Long, the anti-gay pastor of New Birth Missionary Baptist Church, of plying them with gifts to get their gay love. Kemp was so taken with his dirty daddy ways that he tattooed Long’s name on his wrist. When Kemp was tied to the financial settlement Long made with the men last year, it turned out he was using his payday for $100 per hour recording sessions to pop out songs including “Pornography.” The terms of the settlement were secret, so when a Fox 5 reporter caught up with Kemp, he sprinted into a waiting limo and sped off. Since then, Kemp’s apparently been authoring a book about the sordid affair that may turn into a screenplay and a movie. You know, about getting "fucked by the devil himself." Tyler Perry as Long? We can only hope.