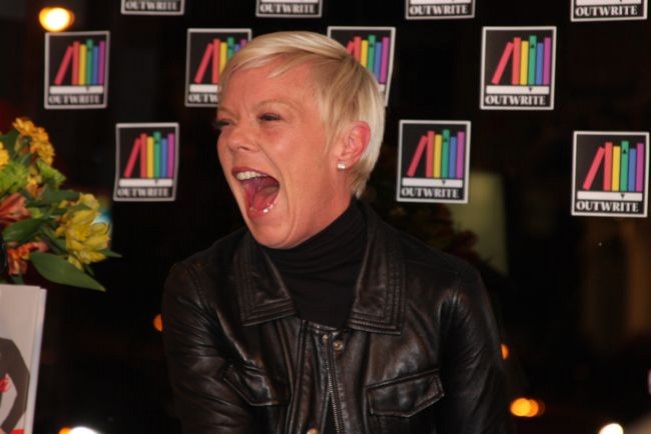 Tough love advocate and lesbian hair stylist Tabatha Coffey isn’t shy about handing out advice to owners of troubled businesses. But the reality TV star has a softer side, especially when she’s nuzzling Beluga whales in Atlanta.

Coffey has turned her penchant for putting businesses back on track into the Bravo hit “Tabatha Takes Over,” which opened its fifth season on April 4. Sadly, she doesn’t save any Atlanta businesses this season, but she gets as close as Nashville with a trio of salons and a barber shop.

But she’s no stranger to Atlanta, packing a 2011 appearance at the now-closed Outwrite Bookstore and returning after that for hair shows. And don’t rest too easy, businesses owners: She might bring her crew to Atlanta for the show’s sixth season.

“I would love to come back to Atlanta,” Coffey says in a recent phone interview with Project Q Atlanta. “I always have a great time in Atlanta.”

And when she’s here, Coffey is all about the Georgia Aquarium’s whales. She went swimming with them during a trip with staff from an area salon. Just don’t tell lesbian actor Jane Lynch.

“The aquarium was absolutely magnificent. It is one of my favorite places to go,” Coffey says. “We all got to go swimming and it was special and the people there are amazing.”

The new season of “Tabatha Takes Over” continues the show’s expansion into businesses other than hair salons. Coffey sold her New Jersey salon in 2011 and since, the show has taken on bed and breakfasts, restaurants and gay bars. In the new season, Coffey helps rescue the gay nightclub VIP in Riverside, Calif.

“It has been there over 20 years. But because times have changed so much, it has fallen on hard times and it was nice to be able to go in and help them get back on track,” she says.

The show’s new season also brings an amped up dose of Coffey’s trademark tough love and honesty, if that’s possible.

“It’s really a good season. Some people say that I am harder on hair dressers than other business owners,” she says. “The season has more of the things that people like about the show and the things that they expect from me. My frustration is amped up and tough love approach is amped up a little bit. Everyone will enjoy it.”

But it’s not always tough love from Coffey. Each Thursday during the show’s run, she makes a date night with fans and interacts with them though her Twitter and Facebook accounts when the show airs at 10 p.m. And yes, the well-coiffed and put together Coffey may be fielding your questions in pajamas.

“It is fun, it is really enjoyable and I know a lot of people have questions for me when the show is on. It’s a nice way for me to relax and I have a lot of fun with it,” Coffey says.