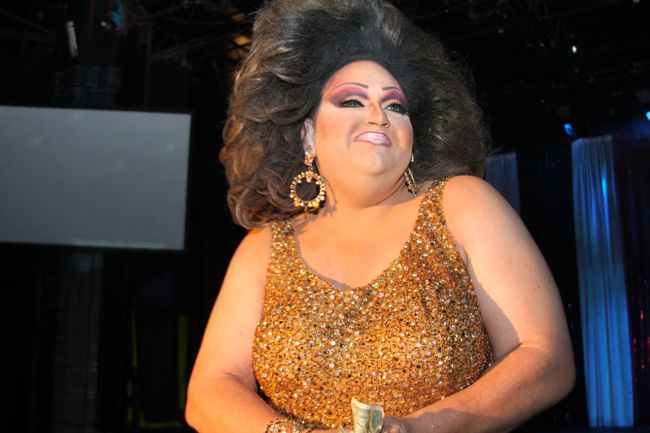 When a 13-year mainstay of Atlanta drag says goodbye, queens and kings come out of the woodwork. More than 20 performers put on their faces and finest for Alexandria Martin’s Nov. 13 Bon Voyage Show at Jungle.

“It’s overwhelming to know that I have people that care about me and actually really want to be there for me,” Martin (top photo) told Project Q Atlanta in advance of the event. “It’s so nice that so many good friends and performers of that caliber were willing to turn out for me. I’m very grateful and truly blessed.”

Speaking of local legends, who else was there? CNN hottie Rob Marciano and his entourage were gathering stares as well. Of course, he’s no stranger to the gays. Whether he’s drawing gay drool over his shirtless warm front, or modeling for one of our favorite gay charities not once, but twice, Marciano always has our attention.

Martin leaves Atlanta next month to return to humble beginnings in Wichita, Kan.

“I am retiring from drag and moving back to be closer to my family,” Martin said. “It should really be called semi-retirement because I can’t give it up completely, but it’s not going to be the focus of my life.

“I love drag, but after 20 years doing female impersonation, I need a break to enjoy life and go back to drag being just a passion and a hobby,” she added.

Emotions ran high during Martin’s opening number on Saturday, with a long line of fans gathered to tip and hug her (third photo). There’s been a lot to love in her 13 years in Atlanta, Martin said.

“Performing at Pride always was one of my favorite times. “’Drag Idol’ with Charlie Brown, pageants, and really the most precious is building friendships. It’s amazing how many true friends I have from the drag community. I’ve been fortunate to work in almost every club in this city, given those great opportunities by bar owners, and it’s been just amazing.”

But like Cher’s Farewell Tour, fans who want to show Martin some lasting love have one more chance. A final goodbye is planned at Blake’s on Nov. 23.

“I’d just like to say thank you to Atlanta and everybody for the love and support,” Martin said. “I really appreciate the 13 years of friendships and laughs. I might be moving home, but I’ll always have a home in Atlanta, and it will always have a big place in my heart.”