Tony-nominated actor Sam Harris brings ‘Ham’ to Out on Film 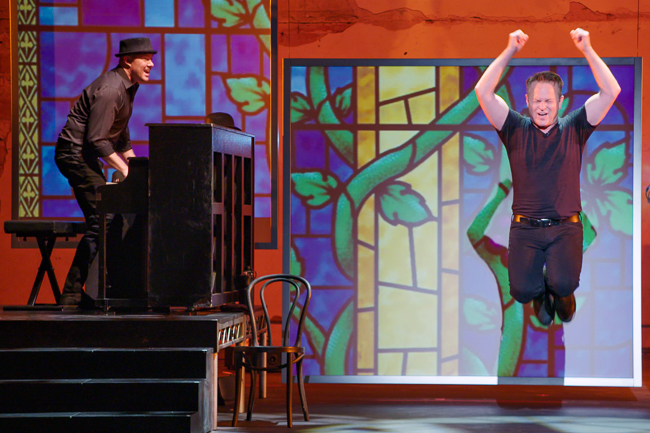 Sam Harris burst onto the entertainment scene in that most ‘80s of ways — by becoming the grand champion of the original singing competition show Star Search.

He went on to become a multi-million selling recording artist, a Tony-nominated actor and a bestselling author, but he spent most of those early years in the closet. That’s just one of the periods that he dives into in his film, Ham: A Musical Memoir.

The film, based on his comic and sometimes poignant book and subsequent Broadway show, is a Q Spotlight screening playing Out on Film on Oct. 5. Making the autobiographical work was a new kind of acting experience for Harris.

“As an actor when you’re playing a role, you use your own personal experiences to inform that fictional character, to make it real for you,” he tells Q. “In this case, it was really real. There was no substitution. I am reliving these scare moments and these thrilling moments, and I play 11 different characters in my life.”

“I did it in New York, then L.A.,” he says. “We had a great response critically and we won some awards and then we were doing it at the Pasadena Playhouse and we’re like, ‘Let’s film this.’”

The story delves into Harris’s life growing up gay in the Bible Belt in Oklahoma, using singing as a way to cope with his struggles. He leaves home as a teenager and falls in love with a boy. He also attempts suicide over remaining closeted.

It was a different time than the one that out performers like Troye Sivan, Sam Smith and Lil Nas X enjoy today.

“I’m thrilled that we are in an age where that kind of honesty can exist,” he says. “When I was growing up, the idea of being out or much less being married and having a family, these were not ideas that were even fathomable. It was simply not possible on any level.”

“That’s what my suicide attempt as a teenager was about. It was having love and not being able to celebrate that that sent me over the edge,” he adds.

Harris came out in an interview with The Advocate in the late ‘90s, “which was a little fucking late to the party,” he says. “Like really? You don’t know this already?”

After all, it was Harris’s rendition of Judy Garland’s Over the Rainbow that won him Star Search and became his signature song.

Harris now lives with his husband and son in California. Q spoke to him while he was in Oklahoma for his father’s funeral. The complicated relationship is explored in Ham.

“He didn’t have the emotional tools to learn how to deal with me,” he says. “When I grew older, many of those things were resolved. When I had a son, he was this proud grandfather, and he told me he knew I would be a better father than he was.”

Harris is expected to attend that Out on Film screening.

“I’m really excited to see this with that audience,” he says. “It’s beautifully filmed, and I’m so proud of the way it looks and it moves. When you’re able to do closeups and create a feeling through editing and camera angles, it comes alive in a different way.”

“Plus I don’t have to do it anymore if I don’t want to,” he adds, laughing.

Ham: A Musical Memoir screens as part of Out on Film on Oct. 5 at Plaza Theatre. Visit outonfilm.org.