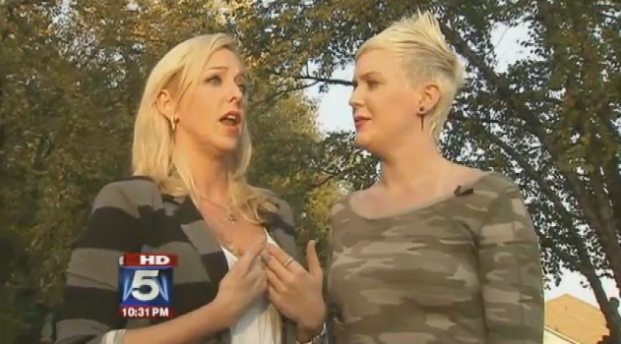 A lesbian couple who complained to a TV station that they were assaulted during Atlanta Pride for being gay told a sheriff’s deputy that they were drinking and instigated the incident and escalated it into a physical confrontation. Kathryn Katalinich and Brooke Creef told Fox 5 that they were verbally and physically assaulted early Saturday as they left a party at the W Midtown Atlanta. They alleged that two men yelled anti-gay slurs as they left the hotel on 14th Street and headed for a cab. When they returned the verbal fire, the men assaulted them and fled, according to the women. But Creef told an off-duty sheriff’s deputy working security at the hotel that she actually started the incident about 3 a.m. when she told a woman on the patio that she looked like a stripper. On Tuesday, the Fulton County Sheriff’s Department released an incident report detailing the confrontation. “She (Creef) stated to me that the incident started as a result of her directing several comments towards the Asian female, during which she referred to her as a ‘stripper’ and made negative comments about the way she was dressed,” Deputy B. Pride wrote in the report. The woman and her two male companions fired back, telling Creef and Katalinich that “you look like a dyke.” The confrontation escalated with both groups yelling at each other, according to the incident report. Then the verbal exchanges turned physical. “Ms. Creef alleged that Ms. Katalinich approached the opposing party, at which point one of the males pushed her down to the ground. Ms. Creef indicated that she attempted to intervene on behalf of Ms. Katalinich, however she was also pushed to the ground. Creef and Katalinich appeared to be moderately intoxicated,” Pride wrote. In their interview with Fox 5, the women did not say that they started the incident or helped escalate it. They also complained that no one came to help them, but witnesses told the sheriff’s deputy that the women initiated the incident. A commenter on Project Q who claims to have witnessed the incident offered a similar take. Katalinich suffered scraped knees in the incident, but both women declined to be treated by paramedics. The men fled the scene and Katalinich and Creef eventually left in a taxi. The women told Fox 5 that they hoped footage from the hotel’s video cameras would help identity the men. But sheriff’s deputies said footage of the incident was obstructed.