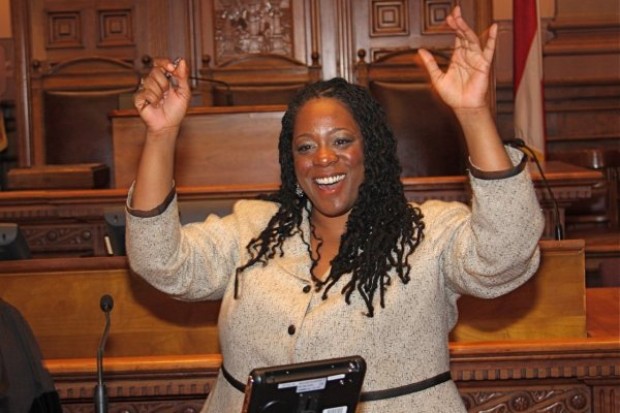 The July 31 ballot is just around the corner, and that means all four of Georgia’s openly gay legislators and a new hopeful are up for voter vetting this year. State Rep. Simone Bell is first out of the gate with a fundraiser next week.

“Hey Folks! It’s that time again, the re-election of State Representative Simone Bell. Yay!” the lesbian legislator announced early this week. “The official kickoff is Wednesday, May 2 with a fundraiser/well wishes/volunteer sign up event. I need your support in whatever way works best for you. Let’s do this again. Send me love!”

“Help send me back to the Georgia House of Representatives,” Bell pitches. “Contribution amounts are greatly appreciated and accepted with love.

Bell took office as the nation’s first African-American lesbian legislator in a 2009 special election to fill the second half of a two-year term in District 58. Then she had to turn around months later and run again for a full term. In 2010, she won that race for re-election.

Since then, Bell has dished on the Gold Dome, spoken in favor of a workplace bias ban in Georgia and battled redistricting. She was also honored for her historic role at Evening for Equality and the HRC Atlanta Dinner. She also made splashes as a guest at San Diego Pride, as one of 40 Legislative Grand Marshals at Atlanta Pride, and at the annual State of Black Gay America Summit.

Bell is one of four openly gay lawmakers in the state, all from metro Atlanta. Keep an eye out for re-election efforts by Karla Drenner, Rashad Taylor and Keisha Waites, as well as first-timer Ken Britt, the gay Atlanta politico who announced his intentions last week for the District 56 seat held by retiring Gold Dome veteran Kathy Ashe.