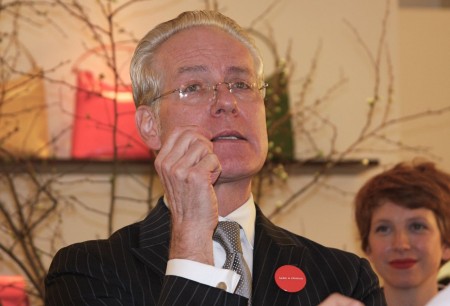 Fashion guru and Bravo icon Tim Gunn popped into Lenox Square Mall on Saturday, dishing out tips on how to add polish and fun to your personal look.

The Atlanta stop kicked off a multi-city tour for Gunn, who is sweeping through Kate Spade stores in several Southern cities in the coming weeks to offer his style tips and brag on the store’s new Spring accessories collection. Gun, besides his roles with Bravo, is also chief creative director for Liz Claiborne, which owns Kate Spade.

With a purchase of at least $100, shoppers received a photo with Gunn. But before all of that, visitors sipped champagne in the crowded store as Gunn talked his way through a mini-fashion event showing off Kate Spade handbags, shoes, apparel and accessories. It was vintage Gunn — sharply dressed, poised and offering advice that made fashion accessible to the masses. (Or at least to Kate Spade patrons, who will plunk down $375 for the Cozumel Oval Basket and $935 for the Bryant Park Swirled Nyssa.)

Gunn also dished on “Project Runway” — dubbing Season Four winner Christian Siriano the next Marc Jacobs — but avoided any specifics about the lost Season Six. Though already taped, that season is in legal limbo as Bravo and Lifetime fight over who can air it.