Tim Gunn in Atlanta to dish on ‘Runway’ 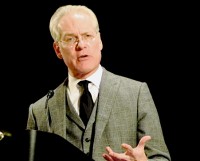 “Project Runway” is a repeat this week, so how about a little insight from the show’s beloved guru Tim Gunn, instead? Georgia State hosted him Monday, and we’re just happy that he agrees with us.

In our weekly “Runway” recaps this season, it’s clear we still have a bad taste in our mouths from last season’s disaster. Of course, as longtime fans, we gave it another shot, and it does seem to be getting some of its mojo back.

This season is beating the pants off the ill-conceived first season on Lifetime (Season 6 overall), and Atlanta Journal Constitution reporter Rodney Ho writes that Gunn confirms “that dreaded Season 6” swam “against the tide.”

At a Georgia State University speech Monday, “Project Runway” guru Tim Gunn dished about his show, not bothering to defend the fiasco that was Season 6 anymore.

“Oh, that dreaded season six will never leave us alone!” he said, when asked by a student.

“At first, I defended the show’s qualities. Then I realized I was swimming against the tide… You barely see [regular judges] Michael Kors and Nina Garcia. I also say I do believe there’s something about the slower pace of Los Angeles. The very different fashion scene and sensibility and that impacted the designers. We’re in many ways a gauge of our environment. I noticed immediately when we taped Season 7 [the current season] , there was more energy, more vitality.”

More bon mots from Gunn at Georgia State on Monday:

• Who would he like to do a makeover? Meryl Streep. At one awards show, “she looked like she was going to a picnic,” he said.

• Favorite season: “Reason it’s hard for me to answer that question… Each season is like a class of students for me. They’re all different. They have differnt DNA. I will say though that season four that produced Christian Soriano. That was a phenomenal season… he’s a prodigy.”

• Gunn’s fashion icon? “You guys are too young. Cary Grant! I said his name to a small group of students awhile ago and they said, ‘Who’s she?’ He was always well dressed. Even when he’s dodging a plane in the middle of a cornfield, he looks good.”

Gunn wouldn’t tell the AJC who he liked among the remaining designers in the current season. He hedged and said something characteristically gallant about each of them having their own strengths and weaknesses.

He’s more candid on his blog after each episode airs, where he often kindly, elegantly scorches some of the judging decisions and tells you what he really thinks. Gunn’s blog is another highly recommended read to help you get your “Runway” fix this week without an actual new episode.

He did have a piece of insight about this season’s Atlanta contestant , Anthony Williams: The man you see on TV is the man you meet in person.

“He is really who he is, and he is quite a character. Thank God for his humor because it works in the workroom.”

OK, but really. How could Anthony fake that level of podunk and hilarity unless he were a highly trained actor? We jest; Anthony may be a crappy designer, but the genuineness of his character was never in question.

Gunn also let his Georgia State audience in on a little of the backstage magic. He credits the “Project Runway” editors with cutting many hours of video into 44 minutes we see each week. Shooting the runway portion alone takes six to seven hours.

And though the show gives the impression he’s not in the design room for very long, he actually spends hours there. And when he’s not with the designers, he’s in the production room watching.

So we’re not getting a new episode this week, but we feel a little better having heard from Mr. Gunn.

Photo of Tim Gunn at Georgia State University by Rodney Ho for AJC.