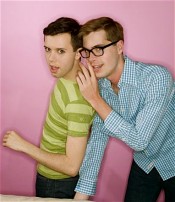 Those sassy and funny gay boys Jeffrey Self and Cole Escola are in Atlanta Saturday and working hard — and late — to make you laugh. We’ve got free tickets to help.

Self and Escola of Logo’s “Jeffrey & Cole Casserole” bring their new semi-autobiographical stage show “Jeffery and Cole Make it Bigger” to Actor’s Express in two After Hours performance on Saturday.

Originally known for their viral webcam videos, the “VGL Boys” were a YouTube sensation before hitting it big on Logo. But they return to their comedic ways while in Atlanta, which also brings Self back to home. He’s a native Peach.

Read more about the boys and their show in our preview.

But here’s the important stuff:

We’ve got two pairs of tickets to the Saturday show to give away to our adoring readers. So drop us an {encode=”[email protected]” title=”email”} or leave a comment below, with an email address, and let us know you want them and which night you’d like to attend. We’ll pick from among the entrants by 4 p.m. each day and notify the winners.