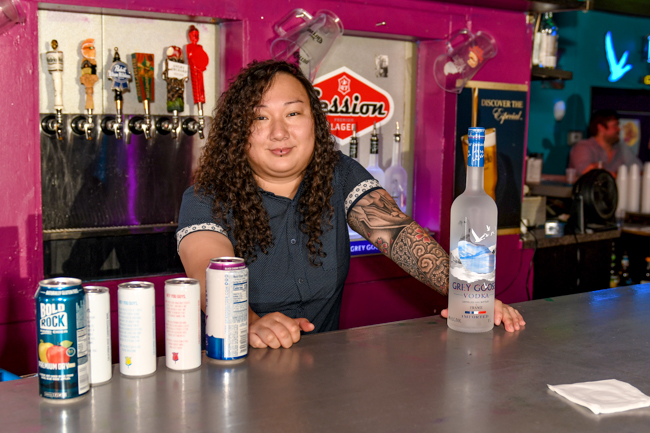 Thuy Nguyen (pronounced “twee win”) is a queer Atlanta bartending veteran with serious skills. In fact, her expertise comes with a crown.

In 2016, Nguyen won the Atlanta leg of the Stoli Cocktail Classic competition for America’s best LGBTQ bartender. Although she didn’t take the crown in the national final, she did get an all-expenses paid trip to Key West for her troubles.

Q bellied up to the bar to chat with Nguyen about memorable nightlife moments, her Olympic aspirations, and her secret to being a great bartender.

I grew up everywhere, but I was mostly based out of Guam doing judo throughout my childhood and traveling everywhere competing and fighting.

My childhood was great. My parents didn’t have much, but they made sure I had great birthday parties and that we were loved.

What led you to bartending?

I got into bartending because I was broke and was trying to pay for my judo. I made my attempts at the Olympic Trials a couple times, but I was unsuccessful.

Along the way, I realized how much I love bartending. I realized that this is what I want to do for the rest of my life. I love people, and I love making drinks. I was told once I had the gift of gab.

What’s your most unforgettable bartending memory?

I was having a horrible time one year. I got into a car accident and a breakup all in one week. But then a [Frogs] regular came in and made me forget everything and made me appreciate life.

She told me that she just lost her mother, and that I can get a new car and a new girlfriend, “but I can never get my mom back.” She said to cheer up kiddo, life is too short.

What’s the secret to being a great bartender?

To treat people the way you want to be treated, with kindness and love. Sometimes people don’t come for the food or drinks. They come for some love.

What’s your go-to drink on your off time?

My go to drink is a double Maker’s Mark on the rocks. Although I am a known mixologist, I like simple and strong cocktails.

Catch Nguyen behind the bar at BJ’s on Tuesday, Wednesday and Thursday nights, and at Frogs on Fridays from 4 p.m. – 11 p.m. Photo by Russ Youngblood.