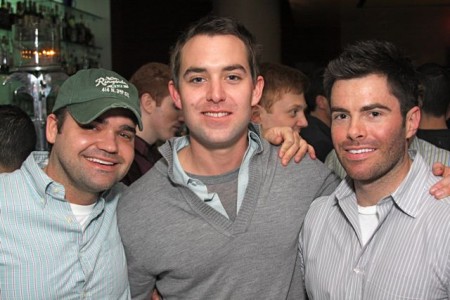 It’s a Thursday night face off of sorts.

A block or two of 14th Street in Midtown gets a little gayer on Thursdays as competing nightlife events aimed primarily at gay men square off just a quick walk from one another.

Since last October, the Thursday Night Cocktail has filled the swanky downstairs bar at Trois, the upscale restaurant that sits street side of the 41-story Symphony Hall just west of 14th and Peachtree streets. The weekly crowd of young professionals often grows to 200.

“We just wanted a more upscale space to have a cocktail in a smoke-free environment,” says Jason Muntz, a salesman in the home improvement industry by day who helped launch the nightlife event. “It is a socially friendly crowd and a great environment, great music and great drinks.”

The allure of a Thursday start to the weekend also caught the attention of promoters Kurt Edwins and Chris Coleman (photo), who launched the successful Social Tuesdays last September. This week marks the start of their latest offering, Hydrate Thursdays at the W Midtown. The hotel, just east of 14th and Peachtree streets, opened last May after a cutting-edge renovation that rebranded it from its years as the gay-friendly Sheraton Colony Square.

“We wanted to bring more options to the Thursday night social roster,” Edwins says. “We wanted to bring something fun and fabulous to the W. It’s a great night to go out and enjoy a little chic and glamour of the W and have a few drinks.”

The competing events, both of which kick off before 10 p.m. and stretch into the early morning, take place within walking distance of one another. The events also target a similar demographic – gay men in their 20s and 30s, though lesbian are encouraged to attend and occasionally do.

Muntz says the intimate feel of the Bar at Trois fosters a more social environment that breaks through social cliques that at other venues might tend to stick close to those they know best.

“People that don’t know each other are talking when they probably wouldn’t in other circumstances. The important thing is to have the right-sized space. We didn’t want to have something too big,” he says.

Edwins says the W’s Living Room and outdoor space pair together the hotel’s upscale appeal with a patio perfect for warmer spring temperatures.

Though Edwins and Muntz both downplay any competitive notion behind the events, the city’s sometimes sluggish gay nightlife stands to benefit.