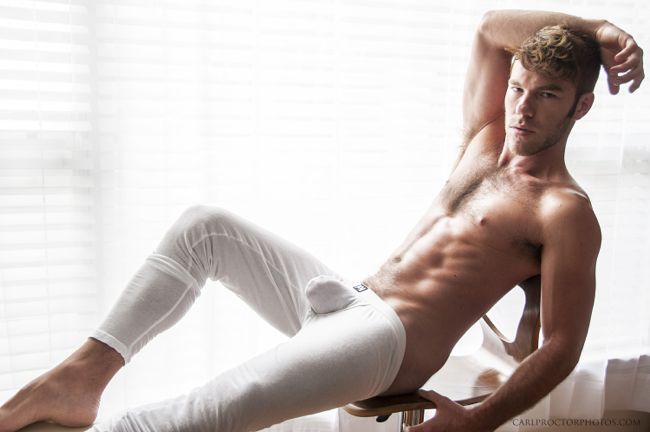 When furry, versatile Morning Fix boyfriend DW Chase first appeared, his hairy, smooth or somewhere in between look wrapped up ever so sexy in his lean, muscled 5’7″ frame set off alarm bells for us and you. So when sexy guy photographer Carl Proctor told us Chase was coming to Atlanta, we were giddy with anticipation.

So we stalked Proctor’s studios until he relented and provided us this steamy taste of what took place inside. As a bonus, Proctor also shared some insight into the work, Chase and how the shoot came together.

As a photographer, I’m always on the lookout for extraordinary people to either photograph or to admire from afar. I’ve been a fan of DW Chase for several years now and would always be on the lookout for the results of his latest shoot with a noted photographer to be posted online. DW and I would occasionally email each other as I would go on about how much I liked this photo or that. For those familiar with DW Chase, in addition to a tight, defined physique, he has amazing body hair and loves to show it off…all of it! At one point when I wrote to DW I said “One day I’m going to photograph you!” and It was one of those obsessions that kept nagging me over time. Finally, late last year we set a date for April this year for him to visit Atlanta and spend two days shooting.

Unlike most models, DW gets very involved in the planning of the shoot and likes to bounce ideas back and forth and try things he hasn’t done before, whether it be locations, concepts, wardrobe or how he “does” his hair. By the time I picked him up at the airport we knew what we were going to do so we could make the most of his limited time here. I spotted him immediately with his tank top and snug cutoff shorts at the baggage claim area. He brought some sexy, fun items with him and I had made a couple special purchases of some clothing that he had suggested. He promised to fill everything out that he wore for the shoot and he kept his promise!

We shot in my Vinings studio, Old Car City USA, the Goat Farm in West Atlanta and at a friend’s home in Midtown in an effort to get a diverse range of photos. While DW loves to tease with his photos, he refrains from doing full frontal work. He feels that his fan base will always want more if they have to keep guessing what’s under that material or his hand. He doesn’t swear, smoke, drink or go out to clubs, but he does make it his business to keep his fans very happy. And that definitely includes me.

Enjoy more of Proctor’s work, view his Model Mayhem profile and check out Chase on Tumblr.