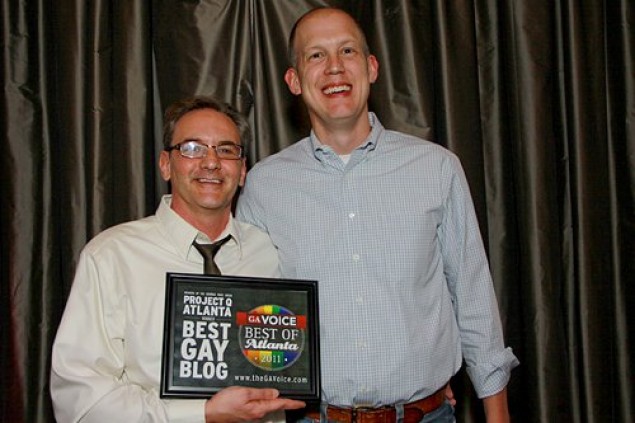 The third time is indeed a charm, or at least, charming. Big gay thanks to those who voted us Best LGBT Blog or Website in the GA Voice’s Best of Atlanta contest for the third year in a row.

The results, including our three-peat win, were revealed Thursday after a month-long nomination process and another month of voting, in which we not-so-humbly asked you to show us some love with your votes.

Once again Project Q Atlanta was named best blog. Matt Hennie and Mike Fleming continue to bring their cheeky style of Atlanta events, entertainment and news to the web. Between Women TV was second and Queer B.O.I.S. was third.

Like the announcement’s use of the word “cheeky” (Read: snarky, irreverent and OK, sometimes downright bitchy) implies, we don’t really do humble. But we are still quite honored and very grateful to our readers for placing us among all of this year’s winners and nominees. The GA Voice toasts them at Friday night’s victory party, just one of the best gay things to do in Atlanta this weekend.

Of course, we don’t do what we do for the recognition, but we’re like proud papas with the results. In the four years since our inception, we couldn’t be happier about this fifth nod in a row from LGBT print outlets, including GV wins in 2011 (photo) and 2010, Fenuxe readers naming us Best LGBT News Source in 2011, and a 2009 win back in the days of the old Southern Voice. Heck, even Creative Loafing named us Best Sign That Gay Media Is Still Alive in 2010.

In return, we promise to keep doing our best to earn a place in your daily media diet. Congratulations again to all the nominees in every category on your contribution to the queer village we all call home.