Three of six LGBTQ candidates sail to victory across Georgia 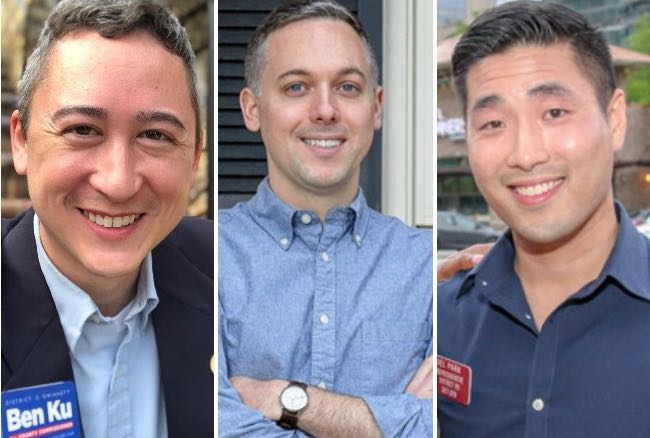 The Georgia legislature now has the largest number of openly LGBTQ members ever and a gay civic activist made history in Gwinnett on Election Day.

They were part of a slew of down-ballot races decided Tuesday that will have a high impact on local government for years to come.

Ben Ku (top photo, left) became the first openly LGBTQ person on the Gwinnett County Commission and joined Marlene Fosque as the first Democrats on the commission in over 30 years.

Five LGBTQ candidates faced voters in state House races on Tuesday, with two pulling out wins. That includes Sam Park (top photo, right) – who will return to his Lawrenceville seat for a second term – and gay attorney Matthew Wilson (top photo, middle), who flipped a metro Atlanta seat from Republican to Democrat.

LGBTQ state Reps. Park Cannon, Karla Drenner and Renitta Shannon also won on Tuesday, but they faced no general election opposition and will start new terms at the Gold Dome in January.

With Cannon, Drenner, Shannon, Park and now Wilson, that makes five openly LGBTQ members of the state legislature – the most the state has ever had.

A rundown of the six LGBTQ candidates and their races:

Ben Ku, Gwinnett Board of Commissioners

Ku beat Republican incumbent Lynette Howard by nine points to win the District 2 seat on the Gwinnett County Commission. Ku is the first ever openly LGBTQ person on the commission.

“Part of the impetus for running was that I do not feel that minorities are well represented in the county that has never had a minority — other than women — on the board of commissioners,” Ku told Project Q in May. “And there isn’t even a diversity of thought when a county that voted for Hillary and Obama hasn’t had a Democrat on the board in over 30 years.”

Hanson – who introduced an LGBTQ-inclusive hate crime bill earlier this year – beat staunch LGBTQ ally Taylor Bennett to flip the seat from blue to red in 2016. Wilson’s win flips it back in the Democrats’ favor.

“Feeling truly honored this morning to have the trust and support of the citizens of #HD80,” Wilson tweeted on Tuesday morning.

Feeling truly honored this morning to have the trust and support of the citizens of #HD80. Thank you to everyone who worked so hard to build our people-powered campaign for better representation. I’m looking forward to rolling up my sleeves and getting to work on your behalf!

Park soundly beat Republican Valerie Clark in a rematch of their 2016 race. He won by 17 points and earned a second term in office.

“We won big last night!,” Park tweeted Tuesday morning. “Thank you House District 101 for all your support and trust!”

Thank you House District 101 for all your support and trust! Thank you to my awesome team of young leaders, and everyone who volunteered and donated. I will continue to work hard and do my best to serve our community and the great State of Georgia. pic.twitter.com/NEXCwBFxpY

Park was the first openly gay and first Korean-American man elected to the Georgia legislature after his 2016 win in the Lawrenceville district.

Wynn first launched a bid for Congress in January, focusing on a platform of expanded healthcare, boosting environmental protections, protecting consumers from financial fraud, raising the minimum wage and passing the Equality Act.

“I’m tired of politicians who say they’ll represent us in Washington, only to have them rubber stamp the agendas of big corporations and lobbyists while ignoring the needs of those who sent them there,” Wynn told Project Q. “It is time we have a representative who is in touch with people all across our district, and understand the struggles we face every day. I intend to win this election and be a leader in Washington, D.C., not a follower. My friends and neighbors across this district deserve nothing less.”

He later switched to the state House race. Ballinger will begin her fourth term in January.

Bridges was inspired to join the race after an anti-LGBTQ adoption bill passed in the state Senate earlier this year.

“I am married to my husband and we have four beautiful foster children,” Bridges told Project Q in October. “These children don’t care who you are. They just want to show that the parent can give unconditional love and consistency and structure to a home.”

With the win, Hitchens earned a fourth term in office and will keep the district in Republican control.

Jordan’s bid to deny Don Hogan a second term in office fell short, with the lesbian school administrator losing by 16 points in this St. Simons district.

St. Simons has been represented in the House by a Republican every year going back to 1976, and Jordan was the first Democrat to challenge the Republican incumbent in House District 179 since 2010.

“I’m against religious freedom bills because gay people have every right to be treated equally and not discriminated against for adopting children and for any reason,” she told Project Q in June.

She said being an out lesbian would not affect her race, but that some people living in her district haven’t enjoyed the same respect.

“We still have a lot of work to do down here. But there’s pockets of people that are so supportive and accepting, so we’re going to keep fighting and keep pushing forward,” she said.