It was a gay, gay, gay “Project Runway: All Stars” finale on Thursday when Mondo, Michael and Austin sent their collections down the final-decision catwalk that left one gay standing. 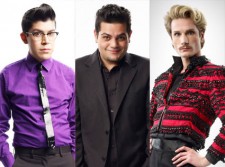 Bucking initial critiques that the first couple of seasons after the 2009 move to Lifetime from Bravo sucked the gay right out of the series, “All Stars” ended up with three gay fan faves who many feel were jilted in their respective seasons.

For the first time in “Runway” history, all three of those finalists were also gay. Season 8’s Mondo Guerra and Michael Costello, as well as Season 1’s Austin Scarlet (photo, left to right) each brought their unique quirks and signature aesthetics to the finale that keep us watching. They were stars among All Stars, half of whom were gay men as well.

Of course, all of the gays, including Atlanta designer Anthony Williams, hottie Rami Kashou and fag hag Kenley are featured in the above video of the season’s “Best Moments.” If it doesn’t prove how Lifetime embraced the gay all season, nothing will: Broadway, Valentino, guys stripping, Badgley & Mischka, catty comments, ooncha-ooncha music, Miss Piggy, everything Isaac Mizrahi says, and So. Much. More.

Spoiler Alert: Don’t read further if you don’t want to know the outcome.

Regardless of the requisite drama that came their way Thursday before the runway show, the time came to line up the girls – the models as well as the gays – and stomp those looks down the runway and into gay hearts.

Austin’s self-titled collection preceded Mondo’s “Therapy” line, followed by Michael’s “Serengeti” pieces. The judges—including two guests Tommy Hilfiger and Ken Downing from Neiman Marcus—didn’t give anything away while watching the designs on the catwalk, and the show producers didn’t give any clues in the editing of critiques toward whom the judges were leaning..

Then the vindication we have all so longed for since Wretchen snapped the victory from Mondo in Season 8.

Mondo wins the biggest prize package in “Project Runway” history, worth over $500,000. Press play on this extended interview with Mondo, including a bromance moment with Michael, upon his big win: