Gay men in Georgia continue to struggle to get elected to public office as three candidates lost on Tuesday in municipal races across in metro Atlanta and Savannah.

Ken DeLeon placed fourth in a five-person race for the Ward B seat on the East Point City Council. And in Savannah, two gay candidates – Travis Coles and David Self – also lost.

DeLeon’s loss, paired with the retirement of longtime East Point City Council member Lance Rhodes, means the Atlanta suburb won’t have an openly gay elected official for the first time since 1999. Rhodes became the council’s third openly gay member when he was elected in 2003. He decided against seeking a fourth term.

DeLeon hoped to replace Rhodes in the Ward B seat. The race marked the third one for DeLeon. In 2009, he and gay attorney Eric Morrow lost their bids for the council. Two years later, in 2011, he lost to incumbent Myron Cook, 51 to 37 percent.

Of the two gay candidates in Savannah, David Self performed best by winning 18.36% of the vote in the District 6 race and placing second. But incumbent City Council member Tony Thomas easily took another term with 58.77% of the vote.

In a six-person scrum for the open At-Large Post 2 seat, Travis Coles placed fifth with 4.96% of the vote. The race will be decided in a December runoff between Brian Foster and Alicia Blakely.

Gay candidates will try again in 2016. At least two gay men are campaigning for seats in the Georgia House – Rev. Josh Noblitt in District 59 and Rafer Johnson in District 62. But 12 gay men have tried – and failed – to win a seat in the Georgia legislature in the last decade. 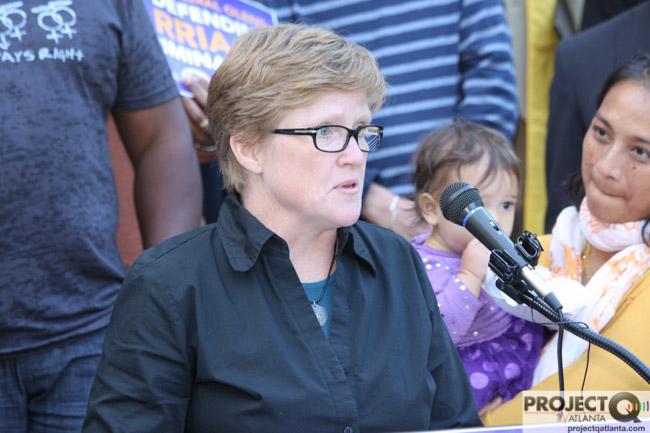 UPDATE | The elections on Tuesday weren’t all bad for LGBT candidates in Georgia. Two lesbians won their races to become city council members in their towns.

In Pine Lake, a tiny DeKalb hamlet near I-285 and Memorial Drive, voters elected Tonja Holder (second photo) to its City Council. Holder, a lesbian who spoke for gay marriage during a rally in October 2014, received the most votes in the race. Voters picked two candidates from among a pool of four. Holder received 33.14% of the vote, while incumbent City Council member M. Ross Pulsts placed second with 27.81%. Pine Lake Mayor Kathie deNobriga, a lesbian, did not run for re-election. She will be replaced by Melanie Hammet.

We’ve reached out to Holder and Ordiales and will further update the story if they respond.