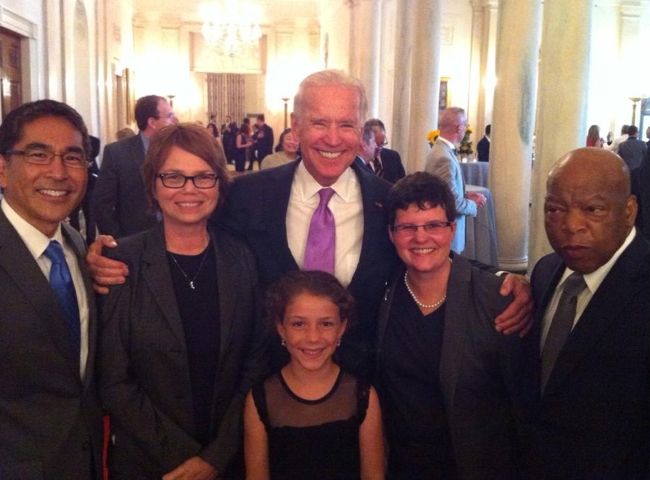 A trio of gay Atlantans, including City Council member Alex Wan, enjoyed a trip to the White House on Thursday, there to celebrate LGBT Pride Month with President Obama and hug it up with Vice President Joe Biden.

And Wan could use the hug. He's had a bit of a month.

Wan was joined by at least two other LGBT Atlantans. Partners Holly Crenshaw and Jen Christensen were also on hand as Obama delivered a push for Congress to pass bipartisan legislation to end LGBT employment discrimination. Crenshaw is a reporter for the Atlanta Journal-Constitution; Christensen is president of the National Lesbian & Gay Journalists Association.

“In 34 states, you can be fired just because of who you are or who you love,” Obama told the crowd in the East Room of the White House. “That’s wrong. We’ve got to change it. There’s a bipartisan bill moving forward in the Senate that would ban discrimination against all LGBT Americans in the workplace, now and forever. We need to get that passed. I want to sign that bill. We need to get it done now.”

Atlanta gays at the White House is a growing tradition. Last month, the White House honored state Rep. Simone Bell for her “strong commitment to both equality and public service.” In September, at least three LGBT Atlantans enjoyed barbecue with Biden.

Gay politico Ken Britt glad-handed with the commander-in-chief during an Atlanta swing in June 2012 and Georgia Equality’s Jeff Graham hugged it up with the First Lady two months earlier. The Health Initiative’s Linda Ellis and her family searched for Easter Eggs on the White House lawn, Graham and a gaggle of gays enjoyed Obama’s White House Pride reception in 2011 and several gay military types were on hand as Obama signed the repeal of “Don’t Ask Don’t Tell” in December 2010.