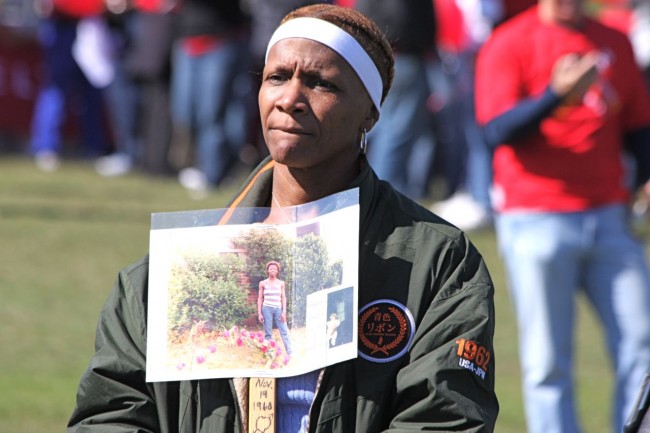 With poignant and powerful speeches, thousands of people were motivated to walk nearly three miles through Midtown on Sunday for the 19th Annual AIDS Walk Atlanta & 5K Run.

More than 8,000 registered walkers took part, helping to boost what organizers hope will be more than $1 million raised from the annual event to support AID Atlanta, which hosts the event, and eight other beneficiaries.

“We must never give up,” U.S. Rep. John Lewis (photo) told participants in a fiery speech before walkers stepped off. “We must never give in. We must believe that we will not and never run or walk alone. We all walk and run together to have a great victory over HIV and AIDS and we will do it in our lifetime.”

The AIDS Walk drew more than 700 teams and 400 people for a 5K run. How much the event raised was not available on Monday. It was dedicated to Allen Thornell and Philip Rush, two longtime LGBT activists who died earlier this year. Tracy Elliott, AID Atlanta’s executive director, called the men “giants in our community” and said the organization will plant a tree in Piedmont on World AIDS Day to commemorate their lives.

“They expected us, all of us, to come together as one community, as one Atlanta,” Elliott told the crowd. “They expect us to honor their memory by caring for those living with HIV and AIDS and working together.”

Mayor Shirley Franklin (photo with Elliott), attending her last AIDS Walk as the city’s chief executive, praised the participants and the beneficiaries for coming together again this year.

Robby Astrove and Danielle Arellano (photo), Atlantans who married two years ago, served as spokespeople for the walk. Astrove contracted HIV as a newborn in 1978 during three life-saving blood transfusions. He discovered he was HIV-positive at age 16 when doctors were treating him for a lingering staph infection.

“Not only did I choose to survive, I chose to live a full life,” Astrove said with Arellano at his side on stage. “I chose education and lifestyle adjustments to stay healthy instead of a death sentence. No one has to do this alone and no one should. HIV/AIDS does not need to be the silent killer it remains to be.”

Arellano said she wanted to join Astrove at the AIDS Walk to demonstrate the importance of caregivers to people with HIV.

“I realized how amazing Robbie’s attitude toward life is and how he could be here representing this event alone,” Arellano said. “But by standing together, hand in hand, we add meaningful layers to an already powerful message.”

Lewis also pledged that Congress would renew the Ryan White Care Act that funds HIV services across the country. A continuing resolution is funding the legislation until Oct. 30. He also said Congress would soon pass comprehensive healthcare legislation.

The event also included a display of panels from the AIDS Memorial Quilt (photo), which has 47,000 handmade panels created in memory of nearly 91,000 individuals who died of HIV/AIDS. It is the largest ongoing community folk art project in the world, organizers said.

View the Project Q Atlanta gallery of nearly 300 photos from the AIDS Walk.