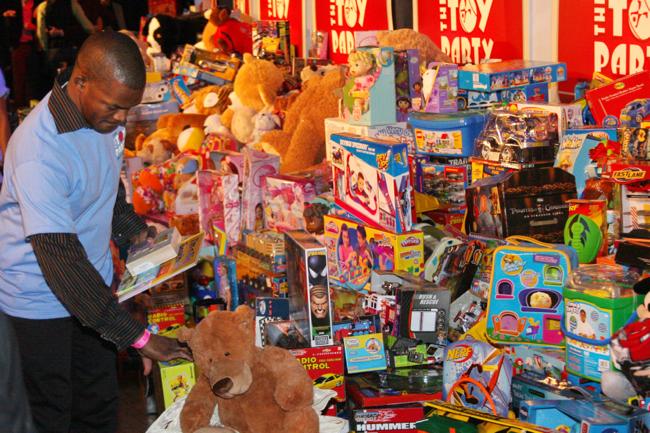 Oh, the holigays. They officially kicked off Sunday when thousands of people flocked to the 9th Annual Toy Party & Silent Auction in downtown Atlanta. The heavily-gay cocktail party and toy drive from For the Kid in All of Us benefits 23 non-profit agencies that serve children in need across Georgia. It also marks the unofficial start of the holiday season in LGBT Atlanta. There were drag queens, the dancing Chocolettes, lesbian DJ powerhouse Vicki Powell (third photo right), Costa Rican vacays and Grammy Awards trips up for auction, cocktails flowing like the Chattahoochee, scores of volunteers and thousands of LGBT folks dressed in their holiday best.

The annual event at AmericasMart3 once again proved that gay Atlanta delivers when it comes to events with a cause. It also demonstrated that we aren’t such sloppy dressers after all. To get in the door, guests donated am unwrapped toy or gift card valued at $25 or more. From the looks of the overflowing collection bins, the event was well on its way to surpassing last year’s total of more than 4,500 toys and gift cards, along with $37,000 from the silent auction.

Though planning for Sunday’s event started almost immediately after the 2010 shindig, efforts went public in November with the Toy Party Donor Kickoff. Toy Party originated in 2003 when a group of friends launched For the Kid, which now also hosts Project Prom in March and Backpack in the Park each summer. From the initial gathering of friends, Toy Party and its all-volunteer organizers have grown into a party that attracts thousands and raises even more for its beneficiaries. In 2010, the Toy Party enjoyed a banner year. In 2009, the event went big, too, with about 5,000 toys and gift cards, with another $20,000 from the silent auction. Some 5,000 toys and more than $40,000 from the silent auction came through at the 2008 event.