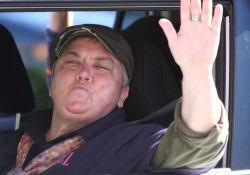 Oh, how we love those sporty gays. You know the ones — they cycle, play rugby, splash around a pool and camp in the outdoors. And many of them are so sporty and proud that they marched in the Atlanta Pride Parade.

There was the Atlanta Bucks Rugby Football Club, who dressed in rugby drag. Haven’t seen that before? It’s special, to be sure. The Bucks were joined in the parade by gay teams from Charlotte and Nashville, who were in Atlanta for the prideful weekend and the Ruck-A-Buck tournament.

Also taking part in the parade were the Decatur Women’s Sports League, with founder Anne Barr blowing kiss (photo) and the Women’s Outdoor Network, which offers a steady supply of events au naturel. No, not nude. But you know, out in nature and away from the smoke and cocktails at your favorite LGBT pub. 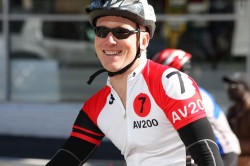 There was also plenty of Spandex, thanks to the folks from Action Cycling 200 (photo). They’re the ones that raise big bucks for the Emory Vaccine Center. (Not for nothing, but the Decatur Women’s Sports League also contributes heavily to the Atlanta Lesbian Health Initiative.)

Also on hand were the Atlanta Rollergirls, the all-female, amateur, flat-track roller derby league, as well as the Atlanta Rainbow Trout. Mmm, Speedos.