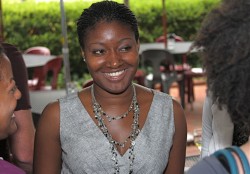 She’s seeking her fifth term in the General Assembly and gay political types haven’t forgotten how strongly Morgan spoke out against the proposed constitutional amendment to ban same-sex marriage in 2004. She helped defeat the measure in the House before it passed on its second try and was later overwhelmingly approved by voters.

But her passionate support of LGBT efforts to kill the measure won her gay supporters outside her District 39 in Cobb County, a boost that’s helped her win reelection, she said Wednesday. Morgan appeared at two LGBT events to tout her endorsements from the Atlanta Stonewall Democrats and Georgia Equality. Her “Voices of Equality” event at the Phillip Rush Center included a host committee of notable LGBT activists.