This scrappy Grindr gay likes to fight with cops 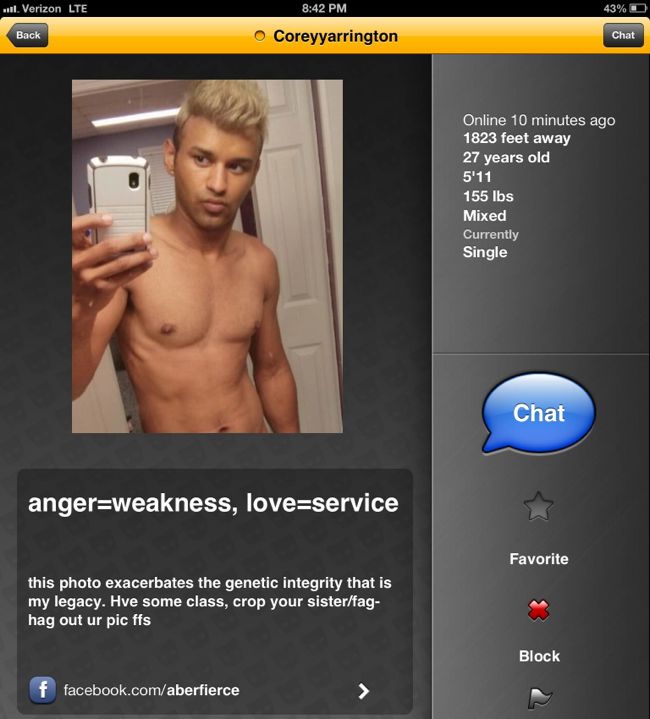 Be ready for a fight, and maybe some meth, if you hook up with this Atlanta guy on Grindr. Too bad he doesn't list his arrest record in his profile. He's packing at least eight. Arrests, that is.

Corey Orlando Jefferson likes his Grindr. The cute 28-year-old with abs was back on the cruising app bragging about his genetics and waving off profile pics with fag hags just days after a two-month stint in the Fulton jail. His release came a day after pleading guilty to a handful of charges, including burglary, from a July 4 arrest that got physical. And not in that Grindr sort of way.

Jefferson's record includes eight arrests in Fulton, starting in 2009 on traffic charges. Three other arrests — November 2011, December 2011 and December 2012 — included a charge of possession of meth. In March, Jefferson was arrested and charged with criminal trespass and possession of tools for the commission of crime.

Less than two months later, he was back in jail on traffic charges. A week after that? Arrested again after a confrontation with an Atlanta police officer inside a Lenox Road apartment. Throughout, Jefferson can't quite explain the meth in his backpack or the syringe in his pocket.

From his Dec. 20, 2011 arrest, which came as he was a backseat passenger in a blue Jeep Liberty on Cheshire Bridge Road:

Officer Severance recognized Corey Jefferson from a previous drug investigation where methamphetamine was discovered in a hotel room he was staying in.

And that bag on his shoulder with suspected meth in it? Not his, Jefferson explains to police.

Shall we take a look inside Jefferson's “it's not my bag” bag? We shall.

A search of the bag found 3.5 grams of methamphetamine, a package of small plastic baggies most often used to sell drugs, and a small silver scale inside of a black make up bag. It was clear that Corey Jefferson had the intent to sell the methamphetamine and that it was not for personal use.

But that was just Jefferson's way of warming up for what happened earlier this year on July 4. An Atlanta police officer, checking into reports of squatters inside an apartment near Lenox Road and Cheshire Bridge, found Jefferson standing next to the front door holding a motorcycle helmet. He told the officer he was there to pickup a backup from a friend, but didn't know his name. And that scooter nearby with the scratched off VIN wasn't his. Nope, not his.

I then noticed that Corey Jefferson was becoming extremely nervous and began to ask me if he had done anything wrong.

Nothing to see here, expect maybe that syringe in my pocket. For insulin. Or not.

I then asked him if he had any drugs or weapons on him and he stated there was a syringe in his pocket that he used for insulin. I asked him if he had any insulin on his person and he stated no. I asked him if he would pull out the syringe and show it to me. He then pulled a syringe out of his right pocket and showed it to me. I became suspicious that Corey Jefferson was possibly an illegal narcotics abuser, and could possibly be in possession of illegal narcotics. I told him to place it down somewhere and not touch it while I was doing my investigation.

His friends inside the apartment knew Jefferson. But wait. What syringe?

As I was preparing to ask them a few more questions I seen the black male throw the syringe and what appeared to be a small plastic bag off the second floor balcony of the apartment building. I then immediately turned to him and asked him what he just did. He stated what are you talking about? I stated the syringe you just threw it. He then stated what syringe?

The officer then tried to arrest him by grabbing Jefferson's arm. Now it was on — on the second floor balcony.

I then grabbed his arm to place him into custody and he pulled it away from me. I then grabbed him again and he pushed me and my rear end went into the railing almost causing me to fall backward off the second floor balcony. I grabbed him to keep from falling back and then pushed him back and into the wall of the apartment building. As I pushed him back toward the wall we both fell to the ground and into some plastic lawn furniture that was set up nearby.

Plastic lawn chair on the balcony? So tacky. But then, the scuffle goes from wrestling to throwing punches. And a cop jumping on the back of this 5'11″, 155 pound Grindr guy.

He then began to to come in my direction in a fast pace and was raising his hands. As we made contact again I swung at him with a closed fist. He then turned his head as he seen my fist coming and my fist struck the back of his head. Since he was much larger (taller and heavier) I used this opportunity to jump on his back and take him to the ground. I put my arm around his neck and my legs around his waist to try and get control of him.

Even pinned on the ground, Jefferson still tried to break free. That failed, so he tried a different tack.

He then told me that he couldn't breath. I told him to relax and stop trying to get away and that I would loosen up my grasp on him. He then complied and I loosened my grasp.

Two other officers arrived, yet Jefferson still had some fight left in him.

More than two months after that arrest, on Sept. 9, Jefferson pleaded guilty to charges of burglary, possession of tools for the commission of crime and theft of services and received a 5-year suspended sentence, according to the Fulton District Attorney's office. Days later, he was back on Grindr, posing shirtless and bragging that “this photo exacerbates the genetic integrity that is my legacy.”