‘This Is It!’ It’s curtains for Wild Cherry Sucret 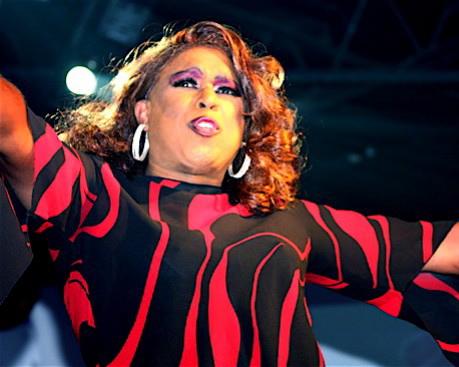 When Tony Kearney decided it was time for Armorette Wild Cherry Sucret’s final curtain call, it wasn’t enough to retire. He had to kill her. Channeling MJ, Cherry goes out in high style on Saturday with a mock-funeral show.

When we saw the Facebook photo of a gold casket promoting the show, our first reaction was, whoa, this shit is serious.

“The Armorettes don’t do anything halfway,” Kearney responds.

Now, “over the top” is synonymous with almost everything the philanthropic camp drag troupe does. Why should Cherry’s exit after a decade of do-gooding drag be any different?

“I was inspired by the over the top Michael Jackson funeral last year,” Kearney says. “I said, ‘When it’s time to go, Cherry needs a funeral like that, including the gold casket.’”

Saturday’s show also includes a “Homegoing Services” program, complete with a smiling photo of the deceased, a biography of her career and a processional of performances. “Heaven,” “Will you be there?” and “Don’t Let the Sun Go Down On Me” are among the appropriately themed songs sure to come with an Armorettes twist.

With tongues planted firmly in cheeks, the Armorettes still remind us that they put the fun in fundraising for a very serious cause—HIV/AIDS. If “Steel Magnolias” has taught the gays anything, it’s that laughter through tears is our favorite emotion.

On this momentous occasion, we decided to talk to Kearney about his journey as an Armorette and to Wild Cherry Sucret about her journey to the beyond.

Project Q Atlanta: Why retire Cherry now?
Tony Kearney: Oprah inspired me with her retirement announcement. I love it enough to know when it it’s time to say goodbye. 10 years is the perfect number. The exact right time.

How do you feel about the “end of an era?”
My 10 years with the Armorettes have been amazing! We have accomplished so much. We have raised tons of money and raised so much awareness to this horrible disease.

What was your most memorable moment as an Armorette?
Wow! So many! Performing for the freshmen at Florida State University orientation. The shock in their faces by the Armorettes’ performance was hilarious!

At Backstreet after a performance, a customer walked up to me and said that this had been the firstt time he laughed since finding out he was positive two months before. That’s why I do it!

When was Cherry born, and what is the timeline of her career?
On May 1, 1995, the Sucrets were born in Athens, Ga., for the Boybutante Ball. A drag trio…a new concept! Cherry performed in Athens and sometimes as a guest at the Armory. In 2000 at the Armory, she tried out and made it into the Armorettes. From there to Backstreet, Burharts Pub and Blake’s on the Park.

Anything else you want to say to those who will miss Cherry so much?
I have loved every minute of making people laugh and helping them to forget their day to day worries.

Project Q Atlanta: How did Cherry die?
Wild Cherry Sucret: Cherry died from an overdose of Divadom! Too much hairspray and eyelash glue and open flames.

Do you imagine you will go to Heaven or Hell?
Definitely Heaven with cosmo in hand. Somebody has to turn it out up there.

Do you believe in reincarnation? Is there any chance we might see an apparition or future paranormal event?
You may see me at the East Point Possum show or Pride from time to time. I think I will actually appear as a drag apparition on Saturday night — who knows!

Are you bequeathing any Cherry artifacts or belongings to anyone special?
The Armorettes are presently fighting over my drag locker! Trashetta thinks she is getting all the Whitney songs!

What will be the epitaph on Cherry’s tombstone?
Here lies Wild Cherry…I need a Skyy and Cran!

This Is It! Wild Cherry’s final show takes place Saturday, June 12 at Jungle, 8 p.m. Buy tickets at armorettes.com and at Outwrite Bookstore & Coffeehouse. The first 100 “mourners” through the door will receive a Wild Cherry keepsake.