This image makes you sad about marriage in Ga. 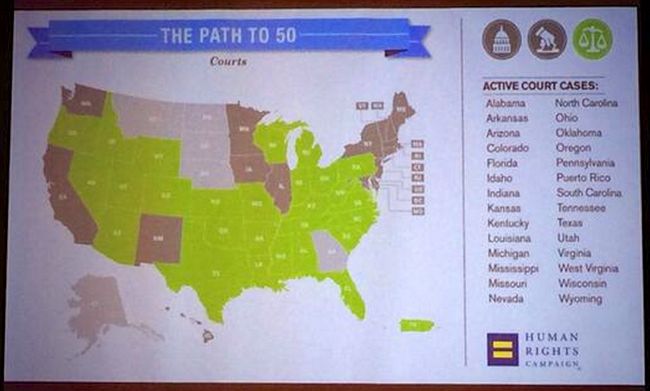 Despite a high profile pep rally last month, the reality of getting gay marriage in Georgia is sobering. Just how sad? This single image sums up the hopelessness.

Here are the states with active marriage cases, per @HRC, as of this morning: pic.twitter.com/INi0i2X2Gr — Chris Geidner (@chrisgeidner) March 27, 2014

Some 57 marriage lawsuits filed across 27 states and not a single one in Georgia. That factoid surfaced Thursday during a marriage equality panel in Washington, D.C. It's a reality that went unmentioned in February during the launch of Southerners for the Freedom to Marry, a press conference that included Mayor Kasim Reed alongside Atlanta activists, gay couples and organizers from Freedom to Marry.

But gay activists in Atlanta told the GA Voice that they are wary of a court challenge to overturn the state's marriage ban, instead pushing a grassroots campaign to kill it. The cost? An eye-popping $10 million. And lots of dead old people.