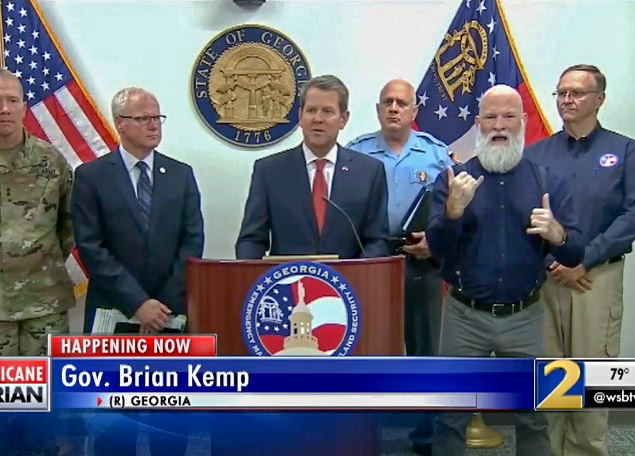 Cowan stood next to Kemp and translated his message into American Sign Language during a press conference Thursday. Kemp issued a state of emergency for 12 Georgia counties along the coast in advance of the hurricane.

Cowan also was the deaf interpreter for Gov. Nathan Deal during a press conference about Hurricane Matthew in 2016. He's a deaf interpreter for Atlanta Pride performers every year, and he’s interpreted at Black Lives Matter protests, anti-Trump protests, the Women’s March and a Pulse nightclub shooting vigil at the Center for Civil & Human Rights.

Cowan was honored for his work by nabbing a grand marshal spot in the 2017 Atlanta Pride parade.

Hurricane Dorian is a Category 2 storm moving toward the Bahamas as of Friday morning, according to the AJC. It could intensify to a Category 4 by the time it reaches Florida’s shore late Monday or early Tuesday. The storm could dump 10 to 15 inches of rain on Florida, Georgia and South Carolina, but Atlanta should be on the drier side of the system, according to WSB-TV.

He told WSB-TV that Georgia is in for a “nasty weekend,” but that he doesn’t advise people to cancel their Labor Day plans.

“I wouldn't want anybody to cancel their plans, but I do think they need to be very weather and traffic aware,” he said.