Creepy cleric says it all about ‘religious liberty’ 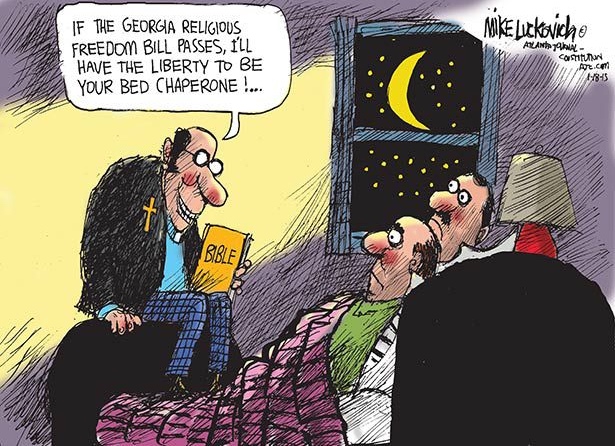 When it comes to God and gays, the days of accepting bigotry disguised as religion are over for LGBT Southerners. Enter the era of straight allies like Atlanta cartoonist Mike Luckovichamplifying our cries for justice.

With a long, Pulitzer-winning career on the right side of history, Luckovich nails the latest insanity and insincerity of Georgia’s “religious freedom” effort in apolitical cartoon entitled “Sleep tight” (above) in Sunday's Atlanta Journal-Constitution. It’s funny at first, but the overarching creepiness of its hovering cleric sticks.

Voices of reason already knew that the proposed state law boasts an insincere premise. Ostensibly to exempt religious views from discrimination, the effort remains a thinly veiled attempt to persecute gay people. No one nails the issue more simply or clearly than Luckovich, whose work also gives a nod to a time not so long ago when religious zealots were climbing into our bedrooms and taking a downright indecent interest our sex lives.

While zealots say we’re intruding on their “relgious liberty,” they stalk those of us just wanting to go about our normal lives. That’s the real intrusion, and Luckovich gets it. Yet again, the equality movement is better for it – just like when he skeweredRussia’s Duck Dynasty, the real gay marriage threatand Georgia's perennial hater Karen Handel.