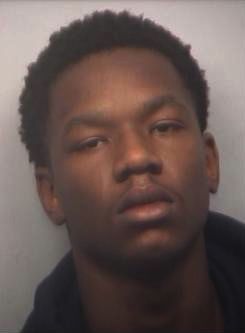 The third suspect in the beating of an Atlanta gay man surrendered to police late Wednesday, just hours after the FBI publicly identified him and said he was on the run in Pennsylvania.

Dareal Demare Williams (photo), 17, turned himself over to Erie, Penn., police about 10:30 p.m. on Wednesday. Police then turned him over to the FBI, according to GoErie.

On Wednesday, the FBI and Atlanta police publicly identified Williams as the third suspect in the Feb. 4 beating of Brandon White in Southwest Atlanta. They said he was on the lam and staying with friends and relatives in Pennsylvania.

Two other men — Dorian Moragne and Christopher Deon Cain – have been arrested and charged in the incident. Their arrests came less than two weeks after at least three gang members attacked and beat White outside a McDaniel Street grocery store, yelling anti-gay slurs and recording the incident on video.

The attack received national attention and prompted a rally (view photos) outside the Southwest Atlanta store on Feb. 11. White called his attackers “monsters” (view video) in an emotional press conference on Feb. 8.

UPDATE: Atlanta police say Williams was arraigned in a Pennsylvania court on Thursday and bail was set at $250,000. He’ll now face an extradition hearing and expected return trip to Atlanta next week to face charges in the beating case. Maybe he can hire this douchebag attorney.