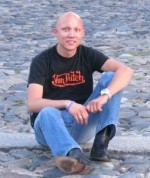 The race for the District 6 post on the Atlanta City Council gets another gay entrant: Miguel Gallegos (photo), a self-described unemployed gay Buddhist who was one of eight gay delegates from Georgia to the Democratic National Convention last year.

He announced his campaign with this Facebook status update on June 16: “Offically running for district 6 atlanta city council!!!” But the campaign gained exposure on Wednesday when Southern Voice posted a brief item on its website.

Miguel Gallegos, one of Georgia’s eight gay delegates to the 2008 Democratic National Convention, joins an increasingly crowded field running for the District 6 seat on the Atlanta City Council.

“I think it’s high time that District 6 has a voice in city government,” Gallegos said.

Gallegos is now among three gay men and a heterosexual woman in the race, which will be decided Nov. 3. Neighborhood activist and communications consultant Liz Coyle joined the race June 16, gay businessman Alex Wan jumped in May 27 and business consultant Steve Brodie entered the race April 2.

Incumbent Anne Fauver, the council’s only openly gay member, has said she won’t seek a third term. Educator Charlie Stadtlander, who is gay, was the the first announced candidate for the post, but dropped out when Brodie announced his campaign.