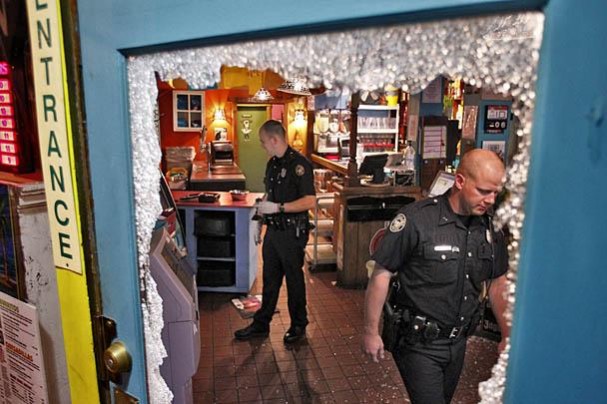 UPDATED | 3:25 p.m.: Fans of the restaurant are invited to attend an event on Monday beginning at 6:30 p.m. to show support in the wake of the burglary.

The staff of gay-popular Frogs Cantina in Midtown is cleaning up on Monday morning after thieves smashed through the front door and grabbed three flat-screen televisions.

Three men threw a big rock through the window, climbed in and took the televisions, according to the Atlanta Journal-Constitution. The same crew apparently also hit nearby Jersey Mike’s sandwich shop.

F.R.O.G.S. owner Clint Barrow told the AJC that this was the first time his restaurant had been broken into in the five years it has been opened, although he and other business owners in the area have had recent problems with vandals spray-painting graffiti on their buildings.

Security video from Monday’s incident shows three men “smashing a big rock through the window and literally climbing through it,” Barrow said.

“It looks like one of the guys cut himself; hope he bleeds to death,” Barrow said. “All three of them quickly went in and within a few minutes just snatched the TV’s, came out, climbed into their cars and went on.”

The spot also hosted Ides of Pride in October and a memorial service for Phillip Rush in May 2009.

The smash-and-grab comes about a month after burglars pried open the rear of gay strip club Swinging Richards. Their booty? Eight bottles of liquor.